Hello!
Our week in El Salvador was all about relaxing. Living in a real house for a week (Camilla and Jack's), the sight of the hammocks, sofas, extensive book collection and huge, well-stocked fridge was an oasis of delights after our non-stop travelling for the past ten weeks. We found our best hammock positions and were soon reflecting on South America. Following a serious attempt to relocate the 12lbs/2" I'd misplaced earlier in the trip, we eventually found some energy to go exploring.

Highlights of Week 11
In a week of 'firsts' we glimpsed the innards of a volcano (under armed guard), spent a weekend at a lakeside house, explored an intricate irrigation system (from the inside), tried our hands at surfing, cuddled a six-foot constrictor, and survived a 7.1 magnitude earthquake.... Not bad for a week in which we rarely got dressed before noon or went to bed after 8pm!

(We've not managed to replace our camera yet, so photos in this blog are mostly borrowed. We have received the donation of an old digital camera from a neighbour of Camilla and Jack's, but are still on the lookout for an Ixus 70, which will fit our waterproof casing. Any Ixus 70 owners reading in Central America should contact me for a favourable price...) 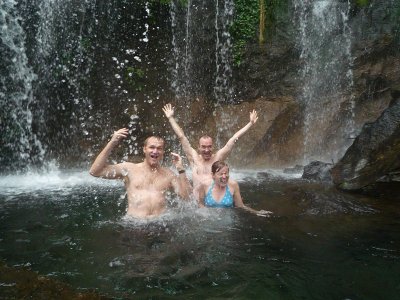 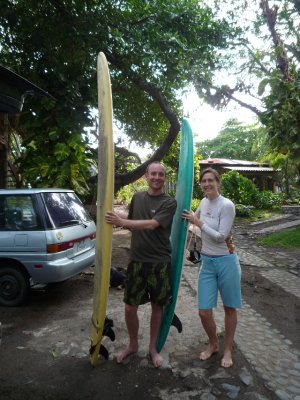 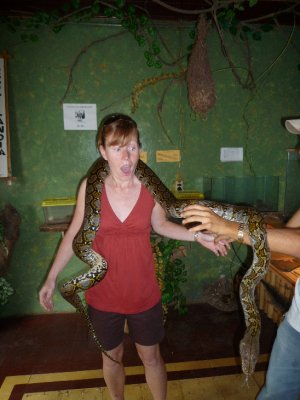 Lake Coatepeque
An hour's drive from Santa Tecla, Lake Coatepeque is formed from a huge crater. The resulting lake is popular for watersports and is a beautiful spot for a weekend. Having landed in San Salvador, we were whisked off to a house on the lakeside for a weekend with a couple of Camilla and Jack's teacher friends. Following a barbecue on the Saturday evening, we spent Sunday morning climbing El Salvador's highest volcano, Santa Ana. Although not a difficult climb, the area has had trouble in the past with robberies, so we set out without valuables, and eventually picked up an armed guide, who was able to relay interesting details about the volcano, whilst preventing us from being shot at. Unsure what to expect, I was stagged by the size of the summit, and surprised to see the crater lake (300m below the summit rim) bubbling violently. 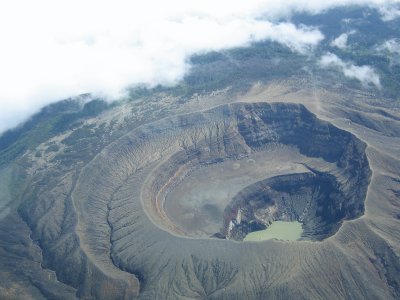 Lazing and Surfing
Whilst Camilla and Jacked worked during the week, we took full advantage of the garden & kitchen and enjoyed lots of reading & cooking. It was an excellent opportunity to work on some detailed planning for upcoming countries, and we are now reasonably well organised for Central and North America. Ali and I also had our first attempt at surfing, at El Zonte. Our first go at it was in great conditions, and we managed almost 2 seconds of standing up time between us.

As we are at the start of El Salvador's wet season, we've had a few storms to contend with. The thunder and lightning is hardcore, though nothing compared the shocks we got from the earthquake that hit off Honduras last week. Although we were ~200 miles from the epicentre, the 7.1 magnitude quake, which struck around 1am, was enough to wake (some of) us up; I was woken by the violent shaking of the bed that was literally tossing me from side-to-side. Luckily it had subsided before I was alert enough to take any action, as I'm really not sure what I should have done!

Juayua
During our second weekend, we went in search of the Food Festival at Juayua. As one of El Salvador's more touristy towns, we had our first opportunity to peruse local handicrafts and sample the local delicacies. On the outskirts of town are a large network of waterfalls and irrigation tunnels, carved out behind the cliffs, which allow for cooling off and exploring the dark tunnels that link the plunge pools. We may have been braver with headtorches and a rope (the tunnels are over 25m with blind corners and sumps), but we had a good nosey round. 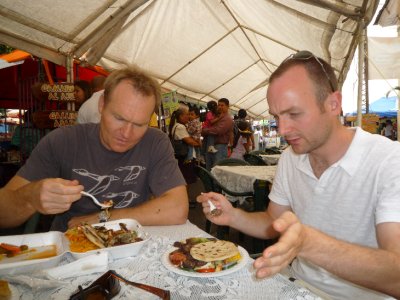 Tasting frog and three 'other' meats at food festival, Juayua

We're both pretty sad to be leaving El Salvador after what feels like a lovely bit of time out from the constant moving around. We're busy cooking a proper Sunday Roast, with stuffing and apple crumble & custard for our last evening here. Tomorrow we get back on the intercity buses, and head into Guatemala. Known to be one of the most beautiful countries in the area – with Mayan ruins and volcanoes aplenty– it's also a relatively unsafe country, so we'll need to keep our wits about us! 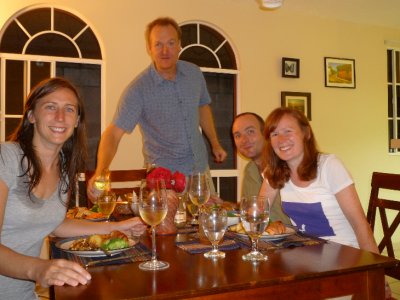