Week 7 (ish) of our adventure

Hello!
We're coming to the end of our time in Bolivia (and heading towards Peru), so it's time to report on some of our highlights here. After an adventurous entrance in to Bolivia (see Ali's last Blog), we've had a couple of weeks to sample parts of the country. The Capital – La Paz – has so much going on and it's cheapness allowed us to stock up on essentials. Surrounding the city are a collection of spectacular, snow-covered peaks, one of which I took on. As we travelled towards the border with Peru, we had almost a week on the shores and islands of Lake Titicaca, which provided some much needed relaxation, as well as our fist glimpse of Inca ruins. A couple of photo highlights, then the stories... 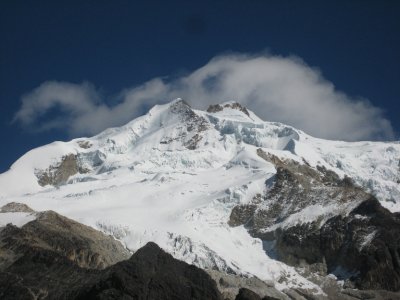 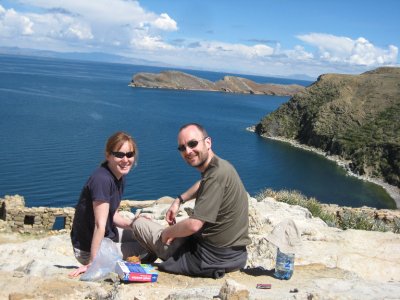 La Paz
At the base of a huge bowl, surrounded by Central Andean mountains, La Paz is as friendly a city as we've visited so far. With the route of an old waterway running through the centre (now the main street – the 'Prado') the single rule of navigation is 'if you get lost, head downhill and you'll be back on familiar ground'. At over 3km high, the city is relatively cold outside of direct sunlight, and we often found ourselves out of breath after relatively short hill climbs; the altitude is deceptive in an urban environment.

Undoubtedly the cheapest place we've stayed, our spacious double room in a city centre hostel was about £5 a night, and a three-course lunch with salad buffet came in at <£3 for two, including drinks. We took the opportunity to stock up on some replacement kit (a new hairbrush for Ali, and a new watch for me after the '50m Water Resistant' timepiece I owned was defeated by a dip in a hot spring!) as well as refreshing our toiletries etc.

On entering La Paz we noticed the apparent chaos of the roads, with traffic right of way often unclear, and pedestrian crossing signals ignored. It appears that the city has taken note, and has hired the services of a couple of hundred zebras to patrol crossings and improve the road safety conditions. These zebras wait for traffic lights to change and pedestrian signals to turn green, then dart out into the road to prevent any vehicles jumping the lights. When not risking their hides to make impromptu zebra crossings, they could often be found helping old ladies with their shopping bags, or causing mischief amongst the zebra population (tying each other to lampposts etc.) All quite a sight after a couple of beers. 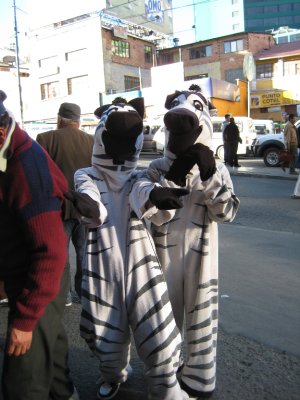 Huayna Potosi
Whilst walking around La Paz, there is almost always a large mountain in view; the city is surrounded by a group of peaks, each of which is around 6,000m high. Huayna Potosi is one of the most famous, and expeditions are run from the city for people who wish to attempt to climb it. Ali correctly regarded this as one step short of lunacy, but I was seduced by the stories of high altitude ice climbing, snow bridges and crevice jumping, and so signed up. It wasn't an easy decision, not least as it meant a few days apart from each other, but the 6,088m (just shy of 20,000ft) peak was clearly going to be a serious challenge, and I couldn't resist.

Whilst we were planning to reach 6,088m, we were obviously starting from well above sea level, so our ascent would only be around 1,300m. In itself this wouldn't be difficult (comparable to an ascent of Ben Nevis), but what comes with the altitude is a) a lack of oxygen and b) a very low temperature, which meant that we were climbing a snow-covered peak (and a glacier) with greatly reduced body strength. For comparison, Kilimanjaro is 5,892m (Everest is 8,800m).

On arrival at Base Camp I was faced with a scene that included a full buffet breakfast with fresh fruit salad (heaven) and a fellow climber receiving IV medication for severe altitude sickness (less encouraging). By the time we had finished our ice climbing training on Day 1, the group of climbers had been paired off, so we knew who we'd be climbing with. Each team was a guide and two climbers. The morning of Day 2 was for relaxation and aclimatisation at the Base Camp altitude of 4,800m. Almost everyone was suffering from headaches and nausea, though at this point I was fortunate enough to be feeling well. We climbed from Base Camp to High Camp (5,200m) on the afternoon of Day 2, bidding 'Ciao' to rock, earth and grass, and 'Hola' to snow and ice. After the classic climbers' meal of French Fries Soup, we went to bed at about 8pm. Day 3 started at a few minutes after midnight, and although only one of the group was seriously unwell, none of us had slept for more than an hour during the four hours in bed. Headaches were common, along with nausea and cold. 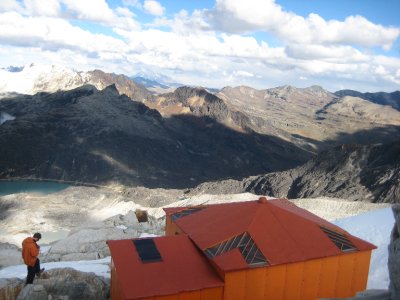 A reduced group set out at 1am, for the five hour summit climb, and – walking by the light of our headtorches, roped together in our teams – we edged towards the summit. Whilst not carrying a large load (our bags contained just snacks, water and cameras), we were wearing quite a lot of clothing and kit. At the outset I was wearing 32 items: two pairs of socks, two pairs of shoes, a pair of cramp ons, a pair of gaiters, four pair of trousers (Morino thermals, Teddy Bear thermals, walking trousers & waterproof trousers), a pair of pants, one T-Shirt, two fleeces, a jacket, two hats, a headtorch, three pairs of gloves, a climbing harness and an ice axe.

The climb was long and hard. Every step required at least one deep breath, and each footstep had to be firmly planted into the snow. The climbs and traverses required strong use of the ice axe and cramp ons, and anyone brave enough to look down with their headtorch light was often treated to terrifying drops. The final stage of the ascent was all four limbs on the ice, along a knife-edge ridge. As it was exposed in all directions, the gusts were unsettling. It was probably advantageous that it was too dark to see was (wasn't) below. 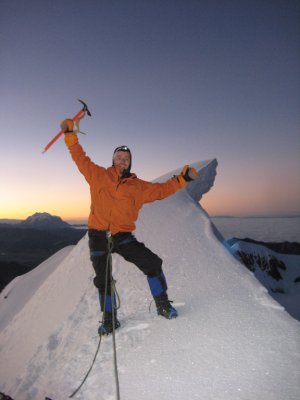 In a fit of jubilation, we summitted just after 6am, secured ourselves in the deep snow and settled down to watch the sunrise over the 'ocean' of cloud (the cloud base was at around 3,000m so 'islands' which were actually peaks of lower mountains were apparently floating). The 360° panorama was a once in a lifetime view, with the lights of La Paz, the distant Lake Titicaca and the remainder of the peaks all gradually illuminating in the orange light. 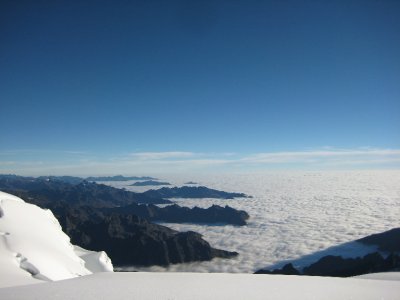 Looking down at the sea of cloud

By 7am, we had started our descent. It was critical that we got off the snow before it warmed up, so we had to move fast. Though we were safely at High Camp by 10am, there was one or two scares, where footing was lost in the softening snow, and mini-avalanches were possible. In tracing our ascent route, we were now treated to full views of the crevice crossings we had made, and agreed that on this occasion, ignorance had been bliss. The descent was complete by noon (to Base Camp), and we returned to La Paz on the afternoon of Day 3. 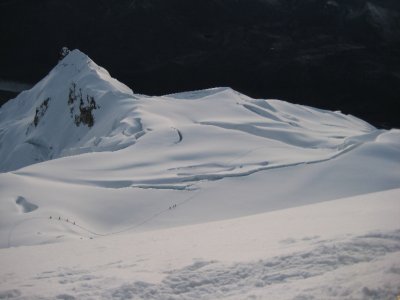 First sight of the route we took, weaving between (or jumping!) crevices

The exertion, altitude (and 30+ hours without sleep) took it's toll, and I was not fully mobile for the following three days. The challenge was everything I hoped for, both mentally and physically, and the rewards were as spectacular as promised. The only potential problem is that I have the urge to go higher, and I can see this being an expensive habit to pursue...

Ali's time in La Paz
Whilst Ro was climbing I spent the time hanging out in La Paz and getting to know the street vendors and zebras well. My bartering skills were tested in the local markets and then my patience in the central Post Office where posting a parcel home became a full afternoon's occupation. I joined a group to go up Chacaltaya, at 5,000 meters where I got a good view of Rowan's mountain. This used to be the world's highest ski field (so you can drive up to near the summitt) but the lack of snow in recent years has meant its shut down – scary to see the sharp impacts of climate change.

Lake Titicaca
From La Paz, it's a 5 hour bus journey through a beautiful agricultural valley to Lake Titicaca, which at 3,812m is claimed by many to be the world's highest navigable lake. We arrived in Copacabana, a small touristy town on the lake shores which surprisingly doesn't have any ATMs... Having sourced some currency, we crossed to Isla del Sol, a nearby island where the Inca civilisation believe life began. It's a stunning wee island, with hill sides packed with terraces, crystal clear bays and small villages of terracotta houses. We had two nights on the island, walking along the network of paths often meeting an inhabitant herding a mixture of sheep/llama/pigs/small children along. On our way back through Copa, we found ourselves in the middle of the annual '3rd of May' carnival. The processions circled around the town well into the night, and provided a glimpse of how Bolivians party. All in all it was lovely few days of relaxation before crossing into Peru and going further along the shores of Lake Titicaca. 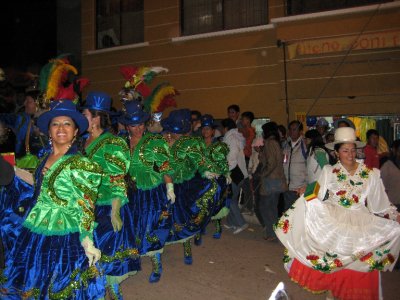 3rd May Festival parade through Copacabana

Apologies for the mammoth posting; Internet access is becoming harder to find as we move northwards through the continent, so even though we can write regularly on our laptop, posting the blogs is harder. Well done for getting this far, and if you haven't already subscribed, please do – it helps us get an idea how many people are actually interested...!