A short blog – I promise!

After last week's cliffhanger – stranded in Belize due to a washed away road bridge – we got a bus out of Placencia to Orange Walk, in northern Belize and from there we completed our escape north to Mexico. 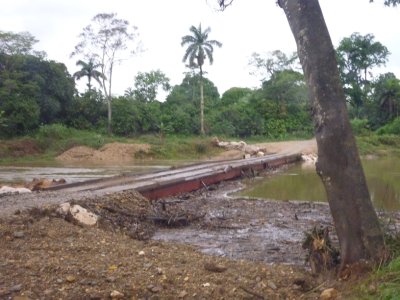 Orange Walk and Lamanai
The town of Orange Walk sits on the New River about 33 miles from Lamanai, a Mayan site whose name translates as 'Submerged Crocodile'. One of the longest-inhabited Mayan sites, it was active from 1500BC right up to when the Spanish arrived around 3,000 years later. As only 2% of the ~1500 buildings have been excavated, it is not the most spectacular example of Mayan ruins, but the day is all about the journey.

A speedboat picked us in Orange Walk and it was soon clear why the Maya had chosen Lamanai as the name of the community. Large crocodiles (up to 10 feet) remained submerged with only their eyes visible, whereas the smaller ones were often seen on the riverbank, warming themselves up for the day. 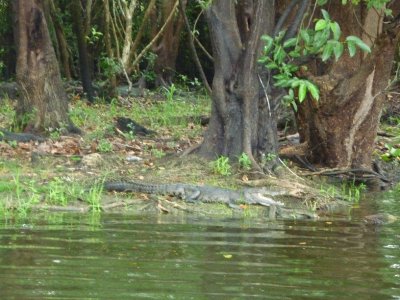 The variety of bird life was stunning, if a little beyond what Ali or I could follow, but the highlight was the pair of monkeys who dropped into the boat for breakfast. They were delighted with the bananas we offered them, and spent 5 minutes wondering up and down the boat collecting their rations. 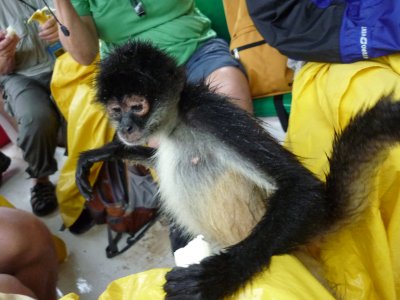 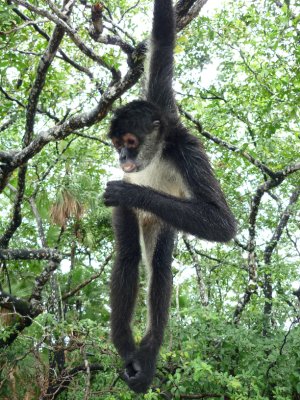 After a brief tour around the Mayan site at the end of the boat ride out (and a close encounter with some killer bees!), we were treated to a display of the boat's power on the way back to Orange Walk, as the driver/guide made the most of his lifetime's experience of the river.

Belize Reflections
And that was the end of our time in Belize. Although we stayed only a short while, it has been one of the most enjoyable countries we've visited. As I mentioned in my last post, the atmosphere is so welcoming and laid back. Belize doesn't have the wealth of tourist attractions that neighbours Guatemala and Mexico can boast, but that's part of the pleasure, and where better to be stranded for a few days with a good book?

1. Whilst in Placencia waiting for the road to open, we were keeping a keen ear out for the weather forecasts, which are available on the national radio station. The first one we heard was the equivalent of the BBC Radio 4 shipping forecast. Following the official jingle we were told “When your fisherman drops off your fish tonight and tells you it'll be $5, shut your mouth and pay him – he's having a hard time out there on those rough seas today”.

2. When the buses did start running from Placencia, we arrived at the meeting point and boarded, around about the advertised departure time. The bus then toured the (two) streets of the town, picking people up at their front gates. On learning that one potential passenger was struggling to bring his bags around from the side of the house, the driver manoeuvred the (60 seater) bus off the main road to the house's rear, to reduce the distance that the laden man had to walk.

3. After enjoying dinner at a riverside bar, we were walking the 15 minute route back to our hostel, through the dark outskirts of Orange Walk. Shortly before we reached our hostel a car pulled up alongside us and the woman produced Ali's jumper; our waitress had found the jumper at our table, borrowed a 4x4 and driven around town until she found us.