As the last blog mentioned, Vietnam recently experienced a very bad typhoon so we changed our plans so as to avoid the badly hit central area of the country and have spent our time either in the far north or south. Our stay here was short, but has provided a flavour of the country, a lot of its foods and some highlights of the Mekong Delta. 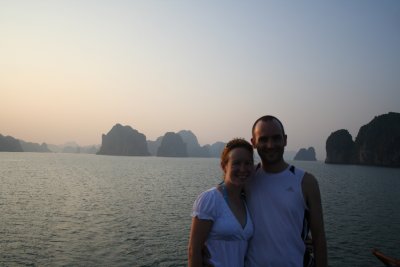 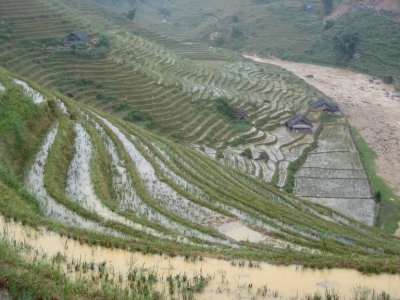 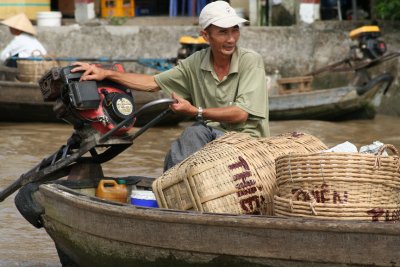 Hanoi
Hanoi (in north Vietnam) is a bustling capital of 3.5 million people and at least as many motorbikes, which crowd onto the narrow streets ferrying everything from small children to enormous crates of produce including, in one case, two whole pig carcasses. They move like a large flock of birds, communicating through the chirps of their horns and managing to dance around each other as they follow some secret pattern of planned maneuvers. We based ourselves in the Old Quarter where, most of the tourist infrastructure is focused, and which is close to the relative peace of Lake Hoan Kiem. During the day this lake serves as one enormous motorbike roundabout, but at night families promenade around the lake or take exercise classes by its shores. 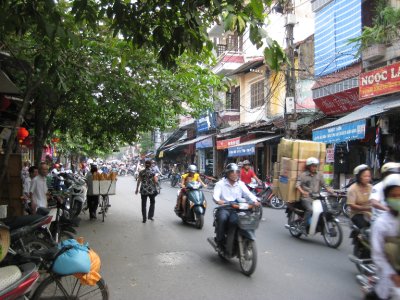 Halong Bay
Most of Vietnam's tourist literature uses photos from Halong Bay which, with its 2,000 plus small limestone islands, give a dramatic backdrop for any brochure. Local legend has it that these islands are two dragons which were sent from Heaven to protect Vietnam from an invading army. The armies' boats were destroyed against the islands/dragons, and the dragons enjoyed their time in Vietnam so much that they decided to stay and created Halong Bay. 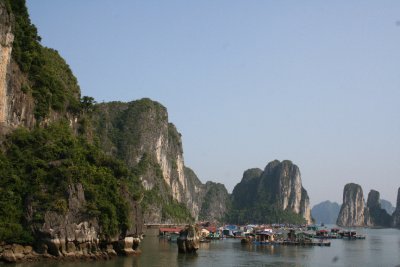 A village of floating fish farms and fisherman's homes

We had two days touring the area on a 'junk' – a considerable fleet of these attractive wooden boats work these waters taking tourists round the more impressive islands and caves. We visited one cave network which was only discovered in 1993 by a local fisherman following a troupe of monkeys. It makes you wonder what else there might be out there! 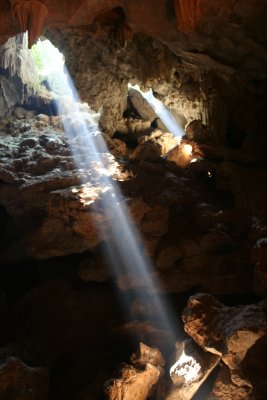 Sapa
It's a short overnight train journey from Hanoi and then bus ride up into the northern mountains around Sapa, a summer retreat for ex-Pats and anyone craving a cool breeze. The village of Sapa has a bustling local market every day and then, on Saturday night when we were there, a 'lovers' market' where young people from the rural areas come together to chat each other up.

With a guide, we went for a two-day hike around Sapa passing through several local villages which gave us a chance to learn about the different cultures and ways of living. There are over 50 different tribal groups in Vietnam, each have their own language and way of living, and can often only communicate together through English. Sapa has several different local tribes, whose wealth is mainly related to the elevation of their village with the poorest living on the steeper, higher areas. We stayed in the Ta Van village, learning how to cook spring rolls with the women of the house before eating these with a generous serving of 'happy water' (the local home-brew). 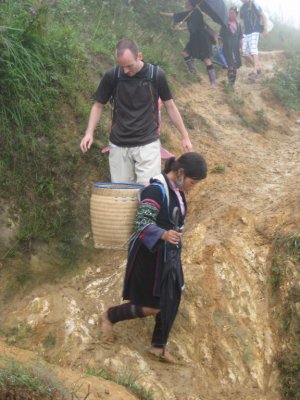 Our walk took us on narrow paths between paddy fields which (as it was either raining or very misty) were mainly muddy slopes and meant we glided our way along much to the locals' amusement. Groups of Hmong women (the poorest tribe in the area) walked beside us trying to help us over the muddier bits before then looking to sell us souvenirs. I found this quite hard to negotiate – they were very effective at grasping your hand whenever it looked like you might slip, and I did genuinely want to talk with them, but I don't need any souvenirs and it soon became apparent that they were only being nice to us because of the expectation that you would part with cash at some point in the relationship.

Saigon
From Sapa it was a 50 hour journey involving a bus and 2 sleeper trains down to Saigon, passing through some stunning countryside – in contrast to other train journeys, Vietnamese train life does not revolve around food in the same way, leading to a few hungry moments when the food cart never appeared. Saigon (or Ho Chi Minh as it is officially called but no one seems to use this name) has a more modern feel to Hanoi, with modern high-rises bustling for space. We used our time there to learn about the Vietnamese War, visiting the Chu Chi war tunnels and War Remnants Museum. Both experiences were humbling and horrifying, telling the very recent story of Vietnam's past troubles. 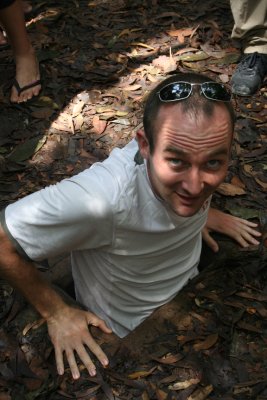 Rowan submerged in a tunnel entrance

The Chu Chi Tunnels is a network of over 200km of tunnels where a large number of guerrilla fighters were based. The tunnels ran as deep as 10m underground and were only big enough for a small man to crawl through on his stomach – an absolutely terrifying thought in any conditions, never mind if bombs were also falling on you. Saigon's War Remnants Museum chronicled the period in more detail and also showed the ongoing effect that the war is having on Vietnamese society. This included a harrowing display on the disabilities caused by the poisons (Agent Orange in particular) that were dropped on the land. The country is extremely welcoming to tourists, and we haven't sensed any kind of hostility towards foreigners – there must be a lot of anger caused by this period and you can't help to wonder where it has gone/been channelled.

Mekong Delta
Described as Vietnam's 'rice basket', the Mekong Delta is a lush and colourful landscape of rice fields, islands and orchards. The river brings down enough water to run complex irrigation systems for rice, vegetables and fruit, produce lots of fish, and is currently a murky brown colour because of the very rich silt it carries which is captured for fertiliser. We spent three days touring the area, getting the chance to sample some of the amazing fruits they produce, seeing noodles being made, and tasting some of the coconut sweeties that are a local delicacy (and should be shared with the world!). 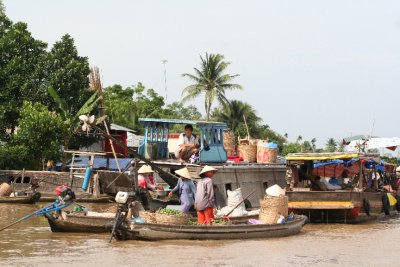 Boats maneuver to sell their wares

A highlight was going through the floating markets early one morning, where locals gather to sell and buy different fruits and vegetables. Selling boats advertise their wares by hoisting a tall pole with one of each variety of product it is selling attached to it; locals then row round these boats haggling for the best deal on anything from dragon fruit to pumpkins. 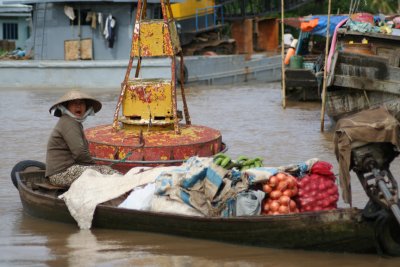 Next Stop Cambodia
Vietnam has been a real jumble of experiences, from feeling horrified about what we learned about the War, being delighted with the friendliness of local people and the delicious meals we have enjoyed, to some frustration with experiences where tourists are just treated as cash-cows. I am left with this feeling that there must be a lot more going on in Vietnamese society than what we can experience, and that whilst we have been perhaps 'protected' from seeing the ongoing after-effects of the war, the country must still be struggling with these. Next stop is Cambodia; our three day trip up the Delta has taken us up stream to the Cambodian border, from where we will start to explore Vietnam's neighbour.