Rowan's last blog left us on the Cambodian border, enjoying a gentle pace of life, before launching ourselves into the mayhem of Bangkok. We threw ourselves into this hectic city, before beating a retreat to Chiang Mai, in northern Thailand, for a week of trekking amongst very peaceful hills. By a wonderful coincidence, we visited Chiang Mai at the same time as the Loi Krathong festival which is celebrated for three days running with fireworks and lanterns. Along with experiencing city and hill-village life, we have also had a good dose of ancient Thai culture at the Sukhothai ruins, as well as squeezing in several days of clear seas and sandy beaches on Koh Chang island. The time here has been a fantastic taster of the range of activities and experiences Thailand can offer, and we would thoroughly recommend them to you! 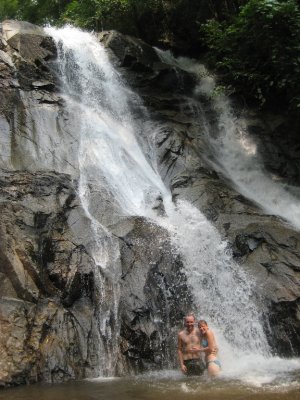 Washing in waterfalls in northern Thailand 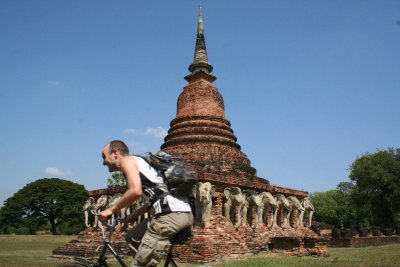 Rowan speeding past a Sukothai ruin 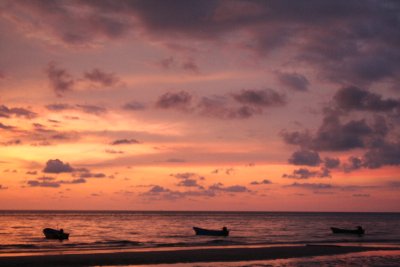 Bangkok
Our bus from the Cambodian border was soon trapped in Bangkok's traffic jams, so gave us lots of time to savour the skyline as we crawled into the centre of town and the infamous Khao San Road. This is the focus of most budget travellers' services, and is a maze of hostels, street stalls and bars through which wide-eyed tourists wander. It is probably the most touristy place I have ever visited, and as such, has created its own tourist appeal – come to watch the tourists! We had a night out in the area with friends from London, being served our drinks by girls dressed as beer bottles....

Besides people watching, we focused our energies on the Grand Palace, which is a glittering array of Buddha statues housed in gold-leafed temples. Several temples and smaller structures are crammed into a relatively small area so we were constantly surrounded by jewels glinting in the sun light – it starts to feel as if you are inside a jewelry box after a while and could give a girl expensive ideas! 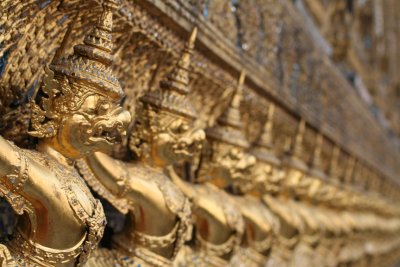 Gold statues at the Grand Palace

Chiang Mai
Chiang Mai, in northern Thailand, is a chilled out city from which we based ourselves for a week or so, enjoying some fantastic trekking and celebrating Loi Krathong festival. We did two three-day treks in the area, wandering through jungle scenery and staying in small villages. Accommodation was rustic, showers were taken in nearby waterfalls and dinner ingredients were often gathered from the fields we walked through... perfect! Whilst most of the walking was powered by ourselves, we did cover some of the distance on the back of a friendly and mischievous elephant and on a very simple bamboo raft (which Rowan steered...). 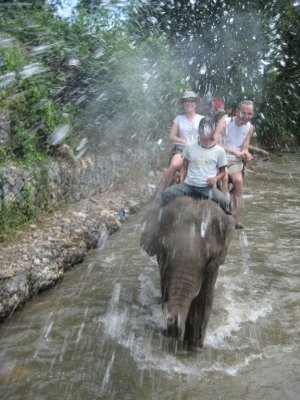 Our elephant launches an attack on the one in front of us....

We also shared a couple of evenings with the villages' children who came to perform songs to us, and then demanded we sang one in return – with our mixed-nationality trekking group, 'Old MacDonald Had A Farm' seemed to be the best choice! The villages are poor, and whilst tourism has apparently improved the Thai Government's investments into education etc, most people were still practicing a basic subsistence lifestyle with not many options for change. 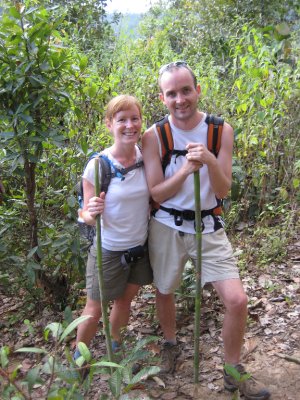 Trekking in the jungle

Our return to Chiang Mai coincided with the Loi Krathong festival which is held annually on the Oct/Nov full moon. Town was chaotic with people launching large paper lanterns (powered by the heat of a small oil candle), fireworks being set off wherever and whenever anyone fancied it, and people striding to the river to launch small banana leaf boats and honour the Goddess of Water. Coming from London, where firework's night is celebrated from a safe distance of at least 20 meters and sparklers are removed from your possession as they are deemed to be too hazardous, walking through these crowds was quite scary. Not sure I blended in as I danced round firecrackers and leapt every time a small child launched a rocket too close to me. I had made us a small banana leaf boat, and we launched it on the river banks whispering a prayer for good luck in the next year (and a safe journey back through the firecracker crowd!). 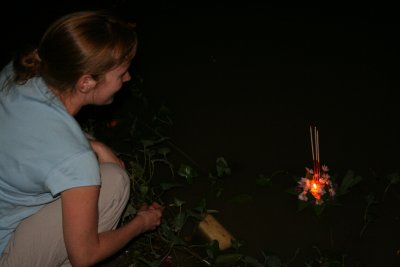 In between our treks, whilst Rowan sorted our laundry, I had a fantastic day doing a cooking course. Whilst some of the ingredients are going to be hard to track down when we get back, I offer you all an invite to a three-course Thai meal.... We have eaten so well that it was rewarding to learn how I could attempt to recreate the meals (and also reduce the spice levels in some of them!).

Sukhothai
In contrast to the glistening palaces of Bangkok's Grand Palace, the ruins at Sukhothai (which means Rising Happiness) are a rambling series set amongst the jungle. We spent a day cycling round these surprising crowd-free ruins which date from the 12th and 13th century. The Buddha statues, set against a network of lily ponds, created a very peaceful atmosphere to enjoy this special place in. 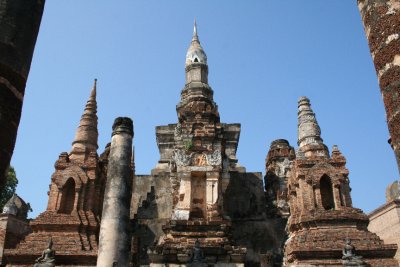 The peaceful ruins of Sukhothai

Koh Chang Island
No trip to Thailand could be complete without experiencing one of their famous beaches, and we chose Koh Chang island, in south-eastern Thailand, to have a beach-break for a few days. We stayed in a wee bungalow on the beach and spent our days swimming, seeking the shade of a palm tree and enjoying a beer whilst watching some of the most beautiful sunsets I have ever seen. Even though this island is relatively accessible from Bangkok, there are no large resorts and fancy buildings, just a row of beach huts and basic restaurants serving barbecued Catch of the Day. 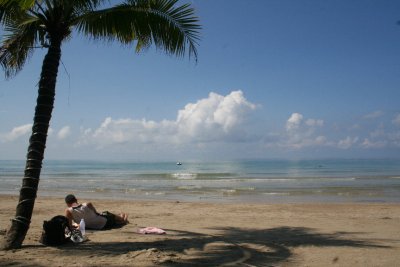 Thailand has offered a wide variety of sights and activities that we could easily spend more time here. Its also been very easy to travel around, find accommodation and to eat well. I came here six years ago and have memories of it being a lot less enjoyable being a tourist here, but the last few weeks have been quite different. Please do invite yourself for Thai food when we get back – I'm determined to get lots of practice on you all!