Even before Ali and I met, we had each wanted to travel the Trans-Siberian Railway. Early discussions of making the journey started our thinking about an extended break from work, and over time this developed into our year travelling the world. We had envisioned it as the start of our trip, gently transitioning from our life in London to a year on the move. Career ambitions, walking seasons and our choice to be in London in August meant that the train ride was moved to the middle of our itinerary. However our brief stop in London meant the journey would still be an introduction to a new phase of travelling, leading us to our seven months in the East.

As we punctuated our three-week journey with two stops of about five days each – and to prevent this blog getting very long – our time at Lake Baikal and in Mongolia are described in separate blogs, accessed by clicking on the underlined words above. Only this overall Trans-Siberian blog will have sent you an e-mail alert, so if you're more interested in what we did on our stops than in my ramblings about trains, food and timezones, please click on the links above. 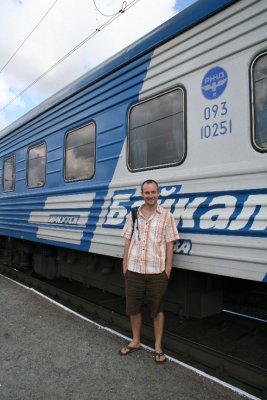 Train 10 from Moscow to Irkutsk, when it was still above freezing 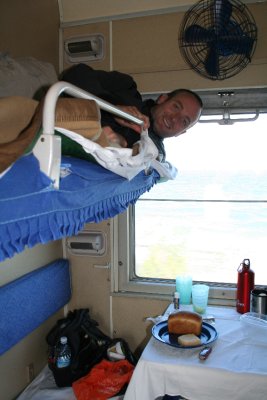 Looking forward to eating the smallest loaf of bread in the world, Train 10 Irkutsk to Ulaanbataar

Our journey
There are a number of variants to the original Trans-Siberian, which is a route across Russia from Moscow to Vladivostock. Our journey from Moscow to Beijing ran the same route for the first two-thirds, before branching off through Mongolia and into China. Excluding the St. Petersburg-Moscow Leg, our 7,865km, 130 hour train journey, shaped up like this: 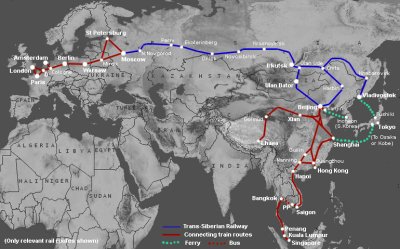 Our trains
Each of the three journeys were made on different trains, which varied significantly. Our first train, the Russian Baikal Train 10 is one of the newest on the route, with comfortable mattresses, extensive storage space and air-conditioning. From Irkutsk to Ulaanbataar we travelled on the Chinese Train 4 – although it's still a nice train by Trans-Siberian standards, the compartments were more basic and toilets flushed straight on to the track which, in the temperatures through which we travelled this leg, was a refreshing experience. Train 24 from Ulaanbataar to Beijing was essentially the same as Train 4. 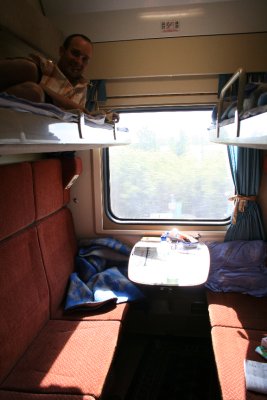 Our home for four nights, Train 10 from Moscow to Irkutsk

In all cases we were sharing a four-person compartment, in a carriage maintained by a Russian or Chinese attendant. Although we shared our compartment with other tourists on all legs, only on the third did English- and German-speakers dominate the train; generally this does seem to be the preferred method of transport for many locals. We shared our compartment with a variety of people, including a Berlin-based, American tatoo artist, a welsh dentist and an Italian couple who were on their way to Brazil, the long way round!

Time & Food
We learned early on in our trip that inexperienced Trans-Siberian travellers have an (understandable) obsession with time. The first leg (Moscow to Irkutsk direct) took about 77 hours, covering four nights and three days. The time difference between Moscow and Irkutsk is five hours and – as we headed east – the towns through which we passed each obeyed their local timezones, which increment by an hour per ~1,000km travelled. However, the train (and all associated matters e.g. train tickets, train stations, train restaurant car) stick strictly to Moscow time, irrespective of where (in Russia) they happen to be. Our attempt to beat the inevitable 'train-lag' was to operate on three 22h 20m days whilst on the train, to hopefully awake on the fourth morning having 'lost' five hours, and therefore adjusted to local time in Irkutsk. Each day's attempts to wake, eat and go to sleep 1h 40m earlier than the previous day were thwarted by the irregular train stops (our best chance to buy affordable, edible food from platform vendors) and by books too exciting to put down. We arrived at Irkutsk tired and grumpy, but having at least enjoyed hours of philosophical debate, and the never ending answers to the often-posed brainteaser 'what time is it?'

Our confusion was further compounded on the second leg where – in crossing eastwards from Russia to Mongolia – we gained an hour as the clocks moved back, as if we were travelling west.... 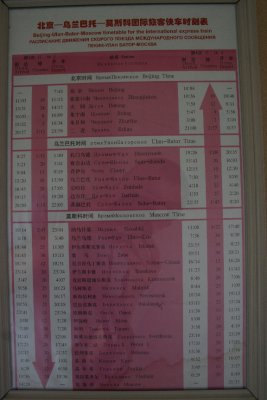 Route timetable from Moscow to Beijing on Train 4, described in three timezones

Unsure of what to expect from the restaurant car and platform vendors, we brought a supply of fresh fruit and pot noodles on board with us. With the limitless supply of hot water at the end of each carriage, the pot noodles (or pot mashed potato as it turned out to be) were a good emergency ration. The fruit was a godsend as any food we could procure on the train or platform was inevitable carbohydrate- or protein-based, which gets tiresome after four days. Throughout the journey, the trains stopped around four times during each day, for anything between 2 & 35 minutes per stop. The timings of these stops had been published (in Moscow-time of course!), so we were able to schedule meal shopping during the longer stops. 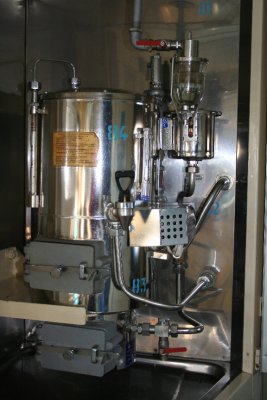 Boiler ('samovar') at the end of each carriage, for endless tea and mashed potato

Throughout Russia, the platforms were either crowded with women selling pre-packed hot meals of chicken & boiled potato or of warm meat ravioli, or the platform was deserted. The presence/absence of vendors may have been related to the time (in either Moscow or the town surrounding the platform) but we were usually too hungry to do the maths. Where available, these meals cost 60-100 Roubles apiece (£1.20 to £2) and felt like good value for warm, home-cooked food. Where there was no food available, we rejoined the train a little upset, but relieved that we had a stash of snacks. As expected, Mongolian and Chinese platform vendors offered far less, and we were well prepared with bread and cheese. 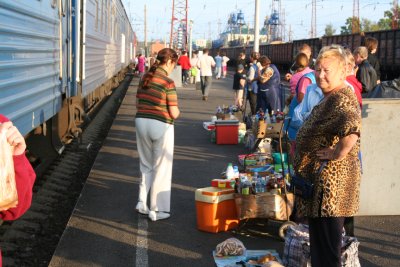 Border Crossings
We made two border crossings, from Russia to Mongolia and from Mongolia to China. Both crossings were late in the evening, and were tedious, drawn out affairs. Over a total of ~6 hours, passports and visas were checked and eventually returned. As trains were in the station area for the duration of the formalities, the toilets were locked to prevent a build up of waste on the tracks. These were testing times as we were often locked on the trains during these extended stops, and it occasionally got a bit uncomfortable.

As the Russian and Mongolian railways use a non-standard gauge (track width) it is also necessary to replace every bogie on the train before continuing in to China, which is no small undertaking. The 16 carriage train was shunted to the 'bogie change shed', where tracks of both gauges ran together. Once each carriage had had it's bogies detached, it was jacked – passengers aboard – two foot into the air and the bogies wheeled out and off to a siding. The new narrower bogies were then wheeled in under the carriage, which was lowered before being shunted out. This was a fascinating process to watch (for the first of the 16 carriages), but took almost three hours to complete. 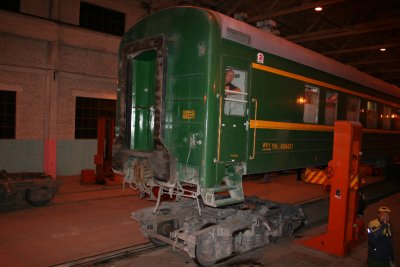 Carriage is suspended while bogies are changed

Taking the Trans-Siberian was a dream come true. It is a long, long journey and however much we prepared entertainment for ourselves, boredom is inevitable when sat in a small cabin for six nights and seven days – albeit with two breaks. Despite the occasional times where we had little to do, the chance to endlessly read, write and talk to fellow travellers was a wonderful change of pace from much of the travelling we have done to date. Our stops in Lake Baikal and Mongolia were each highlights of our trip so far, and although we could have spent more time at both, they provided great glimpses into the landscapes of Russia & Mongolia, and the lives they support. The train journey and associated trivia is a geek's paradise, and this has certainly whetted our appetites for more of the world's great train journeys.

If you haven't already, please see the Lake Baikal and Mongolia blogs, which describe what we did on our stops on the Trans-Siberian.

Well done for getting to the end of this trilogy of blogs – we'll report from China soon, hopefully with a few more photos and a few less numbers!