This blog covers our time in Mongolia – the second of our two stops on the Trans-Siberian Railway. The blog covering the full train journey, both before and after Mongolia, is here.

We spent just over four days in Mongolia, a very short amount of time but just enough to get a flavour of what the country has to offer. As part of our stay we saw the capital Ulaanbataar, and then went out into the country for a short tour staying in gers and getting a chance to experience the nomadic lifestyle. Mongolia has only 2.8 million people but a very proud heritage; people talk proudly of how far their empire once spread and how many arts or farming practices have been found to originate here. Having studied Mongolia at university, I was really excited about this stop and the country lived up to all of my expectations. 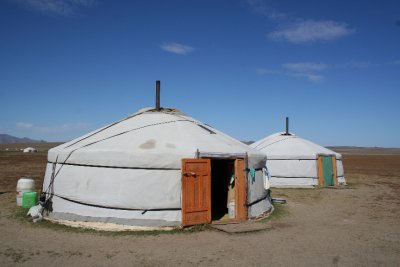 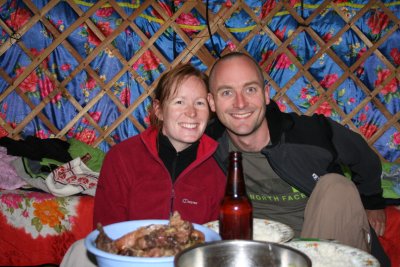 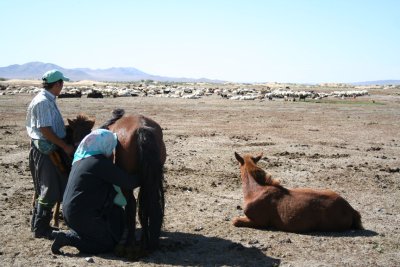 Ulaanbataar
The capital, with a population of around 1.2 million, is a ramshackled and growing city of increasing number, as people immigrate for jobs and the lure of a more western lifestyle. We stayed in the Golden Golbi hostel which was a family-run affair, very welcoming and an excellent base to arrange trips from. We didn't venture too far around the city, as I had a stinking cold and was trying to get rid of it before we set out into the desert, but explored the main street where the State Department Store (perhaps a kick-back to communist days?) provided for all your shopping needs. Cashmere products are big business here and its probably the only place in the world where I will be able to afford a cashmere jumper. So, just before we go into tropical countries for the next 6 months, I have invested in a useful (?) jumper!

Staying with a Nomadic Family
In the short time we had available we chose to join a tour in order to be able to see as much as possible; our three day trip took us to the 'Semi-Gobi' desert, the Erdenezuu Monastery and Hustai National Park. Whilst we were never be more than 300 km from Ulaanbataar, the roads were of varying quality and so progress was be slow. As we drove out of the city, the landscape really opened up with rolling hills and green pastures speckled with gers and flocks of sheep and goats.

Our first night was spent staying with a nomadic family on the edge of the 'Semi-Gobi' desert. The family moves each season and this was their summer quarters, and where their sheep, goats, horses, cows and camels would freely roam, but always seem to know which ger they belonged to. We were welcomed with a cup of Mongolian tea, made with horse's milk and a traditional snack which is rather like a hard Parmesan cheese crossed with yogurt but also made from horse's milk, so has a rather sour taste. Rowan left the tea drinking to me! After this welcome we went out with the father of the family on camels to see the desert – rolling gently over the sand-dunes whilst he quietly whistled to himself in the late afternoon sun was magical. The peaceful silence was only punctuated by the father's mischievous giggle whenever Rowan's cam/el decided to stop and enjoy a local bush no matter how much Rowan pleaded and tried to charm the beast. 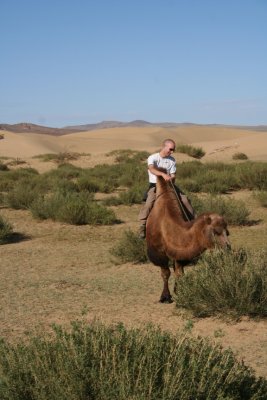 Rowan and his camel in the desert

We ate dinner in the family ger, and spent the evening playing the knuckle game (rather like scissors/paper/stone) where the penalty is to drink a bowl of araig, which is fermented horse milk and therefore slightly alcoholic. A taste of this is enough though and fortunately we seemed to be exempt from the drinking punishments! It was interesting hearing our guide talk about how nomadic lifestyle is changing and pressures such as climate change, the lure of a more western lifestyle, and national borders restricting traditional movements, making him question how sustainable it is. 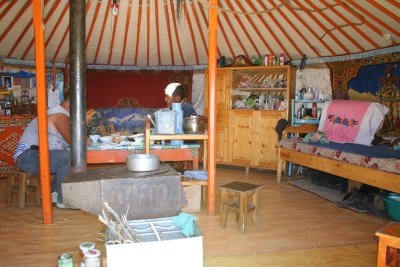 The inside of a ger

We completed our stay with the family the next morning with a horse ride round the pastures. Mongolian ponies are quite short but strong animals and definitely not treated as pets. With a whip in one hand, we bounced our way through the countryside willing the animals to go in the right direction. After a couple of hours, my bottom ached – camels are a far more comfortable ride! 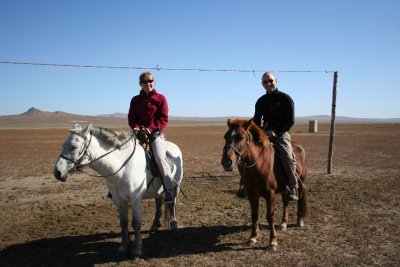 Setting off on horseback

Erdenezuu Monastery
Having left the family we drove to Kharkhorin which is the cultural capital of Mongolia and where the Erdenezuu Monastery was founded. This Buddhist monastery, a network of temples and small prayer buildings, was built in the 16th century and housed intricate art works and statues until 1937 when the communist government destroyed the site. During this period most of Mongolia's 500 years of Buddhist temples were wiped out, in an attempt to destroy the religion. This monastery was partly renovated in the 1960s (with UN funding), but it wasn't until recently, with the fall of communism in the 1990s, that religious freedom was reestablished. 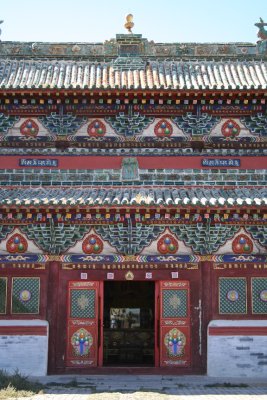 The renovated temples are intricately decorated with symbols of Buddhist Gods and their emblems, alongside some of the original artwork that survived. Our guide talked us through the temples giving a fascinating 'beginners guide to Buddhism' before we finished with a visit to the working temple which was packed with locals paying their respects.

Hustai National Park
Our last day was spent visiting this important park where the wild tarki horse, from which all modern breeds of horse originate, has been successfully reintroduced following extinction in the wild in the 1960s. As we visited in the middle of the day we were warned that it would be unlikely to see any of the horses as they spend their time in the cool mountains but instead we would visit one which was currently in a pen following an operation. With expectations duly lowered, we were amazed to see a group of 5 animals come trotting over the valley in front of us, glistening in the sunshine as they were wet from rolling in a nearby stream. The horses stayed around long enough to entertain us with playing in the mud, before gently ambling off into the distance. We felt exceptionally lucky to have seen them! 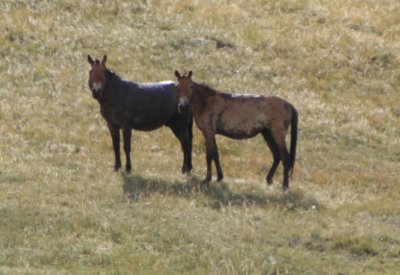 We have thoroughly enjoyed our time in Mongolia. The people have been welcoming and friendly towards us, making it a real privilege to be a tourist here. We have enjoyed a wide variety of meals getting to sample horse's milk as well as a traditional Hot Pot (not much like our Lancashire version!), alongside our own supply of fruit which we now travel with, as it isn't part of the local diet. The wildlife has been abundant, including the chance to get very close to some large birds of prey as they hang out waiting for their next snack. I struggle though to understand how a country whose empire once stretched round the world, is now so small; a book hint for any future Christmas presents!

(You can return to the main Trans-Siberian Railway blog here).