After seeing such diverse wildlife and landscapes already, the second part of our trip to Borneo has continued to wow us. Watching orang utans in the wild was a real highlight, along with visiting one of the world's top dive spots in the waters off Semporna. We ended our trip with a hike up Mount Kinabalu, South-East Asia's highest mountain at 4,095m and a real test for my unfit legs. 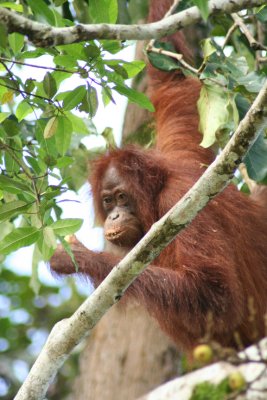 An orang utan on the banks of River Kinabatangan 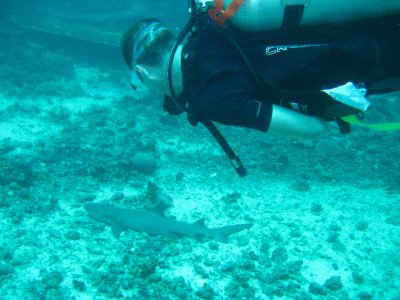 Rowan and a grey reef shark at Sipadan 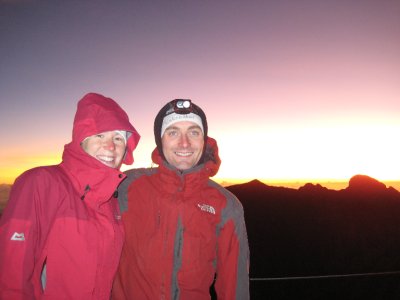 Watching sunrise from the top of Mount Kinabalu, 4,095m

Sepilok Orang Utan Sanctuary and Kinabatangan River
It was shocking to compare the lush jungle we trekked through at Mulu National Park with the miles upon miles of palm oil tree plantations which we drove from Kota Kinabalu to Kinabatangan River. This is the longest river in Borneo, the final third of which is enclosed by palm oil plantations so only a narrow strip of jungle survives on either bank. Sepilok orang utan sanctuary rehabilitates orphaned, injured or homeless orang utans who have ended up in the sanctuary as a result of the loss of habitat in this area. We observed a few of my ginger cousins enjoying breakfast, and learned about the important work of this organization. 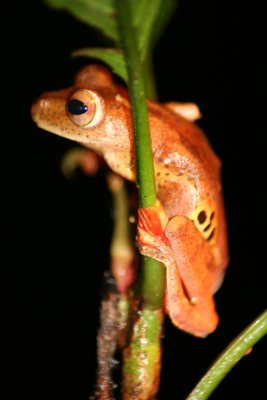 A tree frog spotted on an evening safari, Kinabatangan River

Then we headed up the river to try to see them in the wild. From a basic camp on the riverside, we did two days of boat and walking trips seeing many beautiful birds, reptiles, monkeys and orang utans. At night, we snuck up close to sleeping kingfishers, and at dusk saw the world's largest bat (the flying fox) soar across the sky like an enormous batman sign! The jungle by the river offers excellent wildlife viewing but for the sad reason that the wildlife is hemmed in on either side by palm oil plantations and have no where else to go. Seeing orang utans in the wild was very special, but at the same time we were very aware that they naturally wouldn't be living so close to each other if it wasn't for their reduced habitat. 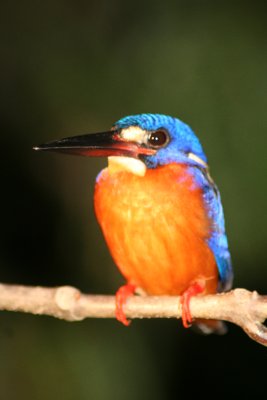 Sipadan and Mabul Diving
From jungle wildlife spotting, to watching fish-life in an area which is believed to be home to one of the world's most diverse ecosystems. Sipadan holds great allure for divers and we may have spoilt our future dive careers by coming here so early – I'm not sure anything can compare! We brushed up our diving skills doing an Advanced Open Water course; although I still feel far from being an 'advanced' diver, it was useful to learn a few new tips whilst diving at some very special sites off Mabul island. 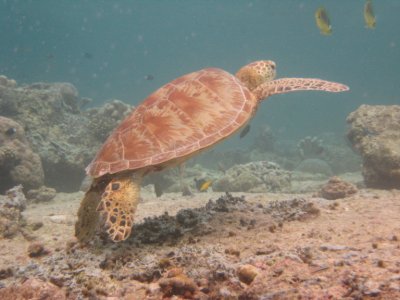 A Sipadan turtle preparing for take off

After getting our new qualification, we spent time at Sipadan having managed to get permits for two days' worth of diving from the Park Authority, which only allocates 120 each day. The list of what we saw is endless, but highlights include lots of turtles, sharks, beautifully coloured fish, eels snapping at us from their holes and an octopus's tentacle (couldn't quite see the rest of him!). Each dive was quite different but they were often in a moderate current so, after descending and sorting our buoyancy, we could simply float along watching the fish-life, only needing to manoeuvre to take a photo. 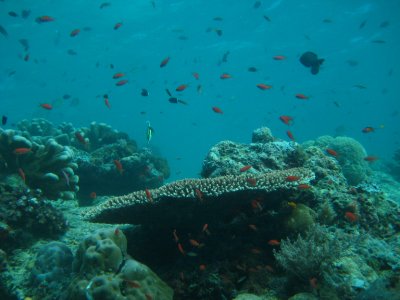 Mount Kinabalu
At 4,095m, Mt Kinabalu is the highest mountain in South-East Asia and a popular climb. We started the ascent from around 1,300m, joined by our cheery but completely unnecessary guide, to climb up a steep path through the cloud layer to a hostel at Laban Rata (3,100m). Having made the climb in good time, we had the afternoon to relax in the sun, looking out over the cloud layer as different shapes emerged from below us. The hostel is pricey to stay in, but we made sure we got our money's worth from their delicious buffet dinner that night, made all the more impressive knowing everything we ate had been carried up the steep mountainside. 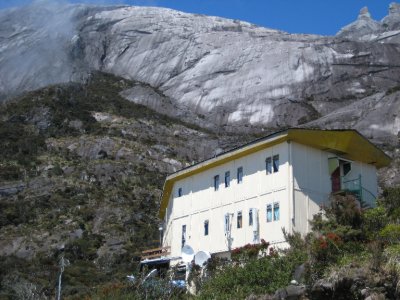 The hostel at Laban Rata (that's not the summit behind it... as we originally thought!)

The next morning at 2am, we rose to more food and then to start the final summit ascent. The route took us over an open rock face, with the way marked by ropes. Walking at a very slow pace so as to not reach the peak too early, we made our way up, summiting around 5:30am in time to pull on as many layers of spare clothes as possible and settle in to watch sunrise. The sky was just stunning with beautiful rock shapes emerging from the dark as the sky gradually lit up. We didn't linger in the cold though, and quickly started the long trudge back to the start of the trail, safe in the knowledge that a buffet lunch was waiting for us there. This was a well-fed mountain expedition! 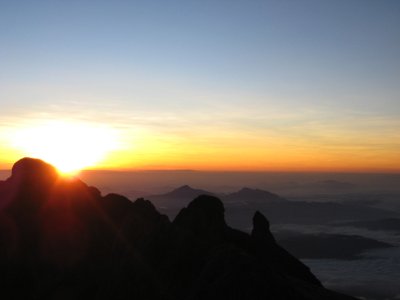 Sunrise at the summit of Mount Kinabalu

Borneo has given us a month of adventures, and very stiff legs that will be with me for a while! I'm not sure where else you could access such diversity of landscapes and wildlife, and we have had a fantastic time seeing as much as possible. The people we have met have been friendly and helpful; we must feature in a lot of people's holiday photos as we have often been stopped for a picture with them. It's also our last stop in Asia as we are now travelling to Sydney after an overnight stop in Singapore and dinner with some friends who are also travelling this year. Arriving in Australia will mean that its almost Christmas time – still struggling to understand how it can be both December and hot weather but hopefully a week or so of being surrounded by Christmas merchandising should help to get us in the mood!