Hello!
It's another Blog from the Bus: we're travelling through the Aconcagua National Park from Mendoza (Argentina) to Santiago (Chile). As we twist through the Andean mountains (on the top deck :-)), we're able to look out over the dramatic scenery, and reflect on the last week, much of which was spent in the mountain in the distance. We've been getting great feedback on the blog & photos, and there have been one or two request for more frequent posts (or maybe you just mean shorter....), so here goes. 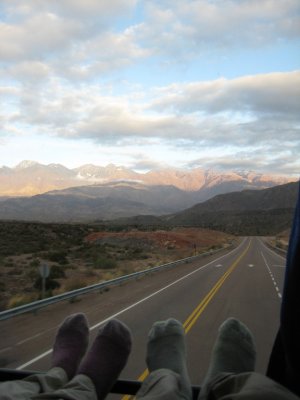 Highlights of Week 5
We were pre-warned that Mendoza has a habit of demanding more time than originally planned, and it didn't let us down. Within hours of arriving we'd reworked the spreadsheet to allow us to take in the streets of Mendoza (relatively recently redesigned after a devastating earthquake), sample the wine from Argentina's best-known vineyards (Ali said the red was lovely) and to take on a three-day walk to the Aconcagua Base Camp (my first go at walking at high altitude). It's been a busy and adventurous week and not necessarily as restful as we'd imagined! 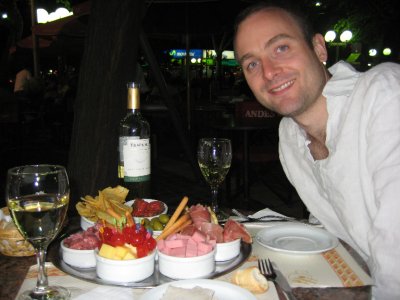 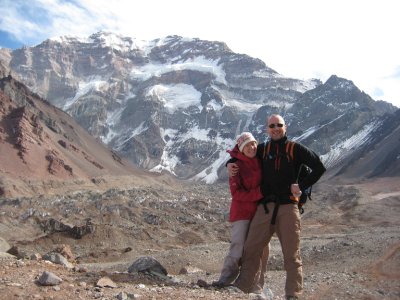 Mendoza
Mendoza was our final stop in Argentina, and is located about six hours east of Santiago, Chile. A well-known wine region, the city also boasts beautiful tree-lined avenues a lively, round the clock, pavement cafe culture and a position adjacent to some of the most inspring countryside we've seen so far.

We had first considered it as a one-night stopover and food shopping opportunity prior to walking in the National Park, but as we made our way to our hostel we were immediately keen to spend time wandering the city, taking in the atmosphere and tasting the wine. We struggled to find an organised wine tour that appealed (most took in the same two vineyards, and were therefore likely to be glorified souvenir shops) so we made do with sipping some local varieties from the bars, cafes and even the local offie. Whilst I played it pretty safe with my whites, Ali enjoyed a couple of reds, and I've no doubt we'll be hunting out Mendozan wine in our Sainsburys Local for years to come.

Aconcagua
About 180km West of Mendoza (towards Santiago) lies the 'world's biggest highest mountain outside of the Himalayas'. With as nifty a tag line as that, we couldn't resist a visit, and so set about planning a three-day walk, taking us up beyond the South Face Base Camp. Our approach was hampered by a bus driver's strike (yep, just the one driver...!), leaving us stranded three hours from the park entry point. With daylight hours becoming a factor, we combined some lateral thinking, a gold VISA card and a fair amount of courage, and hired a car to make our own way there. On our drive over we recognised that we'd increased the stakes and were both keen to justify the unexpected expense.

Having reassured the Park Ranger that we were not planning on attempting a full ascent (it has claimed six lives so far this season), we were issued with our individually numbered waste bag and relieved of our park entry fee; this significant sum of money covers normal National Park expenses (path maintenance, waste disposal etc) as well as 'evacuation by helicopter or mule, as deemed necessary'. The criteria for each wasn't listed, nor was there an option to state an initial preference.

Whilst our planning included extensive inspection and approval of weather forecasts at varying altitudes on the mountain, it didn't go so far as to check whether we were visiting 'in season'. The result of this was that we had some of the finest possible weather, and just three other visitors with whom to share the 71,000 hectars.

Our three-day walk took us to a position at the foot of the South Face of the mountain, Plaza Francia. At 4,200m it was the highest I'd ever exercised, and was a good test for how we might cope with the Inca Trail in a couple of weeks, which reaches similar altitudes. The glacial valley walk was breath-taking (in both senses) and although the glacier was peaky and lightly dusted with sand, this just added to it's meringue-like appearance. We reached the South Face halfway through the second day, and were not disappointed by the view. We were able to find shelter enough to enjoy our lunch whilst considering what route we thought would be easiest.... 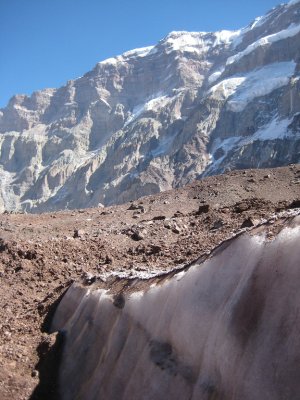 In amongst the glacier peaks, with the South Face of Aconcagua in the background 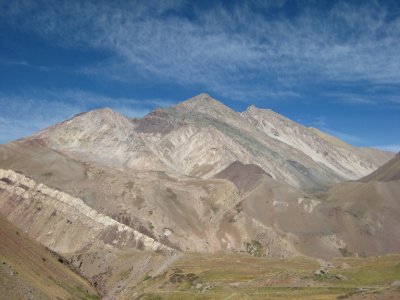 Valley leading down from Plaza Francia to Confluencia camp 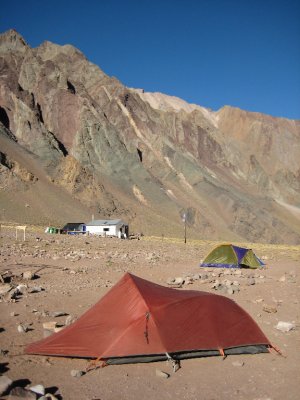 After a successful adventure in the National Park – and no obvious signs of Altitude Sickness, we have left Mendoza (and Argentina) and are on route to San Pedro de Atacama, via Santiago. San Pedro is in northern Chile, close to the border with Bolivia.

As always, we'd love to hear how everything is going at home; you can write to us at rowan@bigtrip2009.com or ali@bigtrip2009.com. And if you've got this far, please do consider subscribing – you'll get an e-mail alert when we next update the blog.

phew... finished just in time, before we took on this 1100m descent in to Chile: 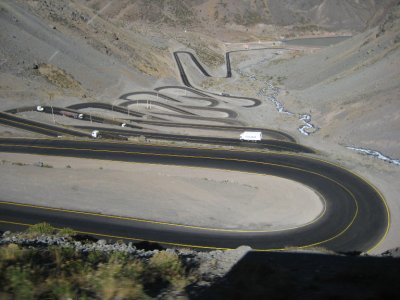