Cambodia: a beautiful country, with a sad history

It's another blog from the bus! After a long stint of predominantly train travel from St Petersburg right through to Saigon, we're back to old buses and bumpy roads as we head for Cambodia's border with Thailand. We've had just over a week in Cambodia visiting stunning landmarks, both famous and infamous. Angkor Wat – the biggest surviving religious building in the world – provided 12 hours of wide-eyed exploring, and we barely scratched the surface. The beaches of Sihanoukville were as beautiful & quiet as we'd hoped, and provided a nightswimming opportunity after drinking with some Americans.... Our lasting memories though will be what we saw and heard around Phnom Penh, in the Khmer Rouge Detention Camp and Killing Fields. Probably not what we needed after exploring the horrors of the Vietnam War just days earlier, but a real eye opener to some very recent happenings. 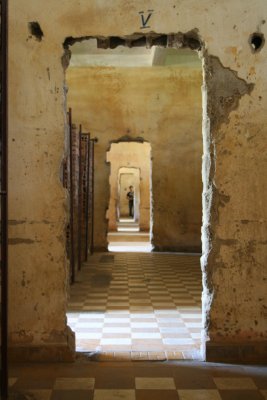 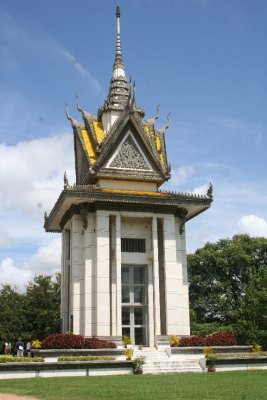 The Stupa filled with the skulls of those killed, Choeung Ek 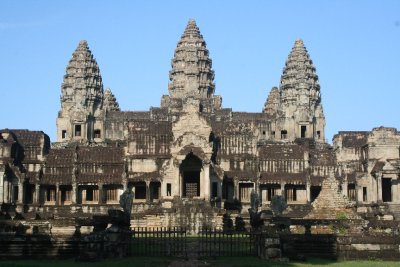 Phnom Penh
Towards the end of our three-day trip through the Mekong Delta, we made the border crossing from Vietnam in to Cambodia. We narrowly avoided creating an international incident (I took exception to being held over the lunch period in an immigration area that happened to be selling over-priced food, which was simply being carried in from the kitchen over the road where we would clearly pay less – we called the policeman's bluff and walked over the border to cheaper food and happier tummies – he retreated to his shed) and set off up the final stretch of the river to Cambodia's capital. We sought out Boeng Kak – Phnom Penh's lakeside area – on the promise of cheap accommodation & beautiful sunsets, and settled in to plan the week ahead.

Tuol Sleng and Choeung Ek
Easily Phnom Penh's biggest tourist attractions are the S-21 Museum at Tuol Sleng and the Killing Field of Choeung Ek; as key locations during the Khmer Rouge reign of the late-1970s they are must-see sights for most foreign tourists, even if the stories they tell are difficult to digest. If my descriptions below do the history any justice, they might be uncomfortable to read.

In April 1975 Pol Pot's Khmer Rouge soldiers entered Phnom Penh and evacuated the entire city into the countryside. Those that survived the weeks of walking were categorised as either those who posed a threat to the new regime (e.g. professionals, intellectuals and former civil servants) and those that did not. The former were taken away for 'reeducation'. The latter were labelled New People, and set to work in farming villages under the supervision of the Base People, who had previously been the farmers. The country suffered years of isolation, regression and starvation as all non-military imports were cut off, and Pol Pot tried to build the ultimate, independent communist state. Ali and I arrived in Cambodia having read a personal account of these events in the excellent 'First They Killed My Father' on our boat trip through the delta.

Reeducation for the people of Phnom Penh was administered in an abandoned high school, which became known as Security-21, or Tuol Sleng. The building has been left essentially as it was found when the Vietnamese entered in 1978. A dozen classrooms housing one bed each were used for torturing non-believers (and later traitors), the shackles and instruments of torture remain in each classroom, alongside a photo of the room's discovery showing a single mutilated body strapped to the bed. Larger classrooms are roughly divided in to cells – it took a minute to notice that the cells were doorless, but only a few seconds to realise why: prisoners were bolted to the floor with a rigid iron shackle around their ankles. The balconies of the three-floor buildings are covered with barbed wire, preventing inmates from killing themselves. An abandoned stairwell was filled with a mountain of old clothes, probably confiscated from the prisoners in favour of the black cotton outfits they were made to wear. 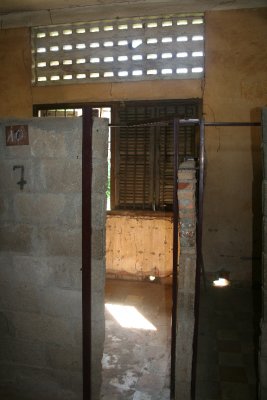 A concrete cell, one of a dozen per classroom

With photographs of victims, profiles of guards and simple exhibitions on the history, the whole school is now devoted to sharing what happen there during those years. For many, reeducation ended at S-21 (up to 100 people were killed their daily), but when the rate of killing increased, more suitable premises were sought, and the 'Killing Fields' were established.

Our tuk-tuk took us to the outskirts of Phnom Penh to Choeung Ek, the killing field primary associated with the capital. The size of a couple of football pitches, records indicate that over 17,000 people were killed at this site, having been brought by lorry from S-21. Prisoners were usually killed shortly after arrival, they may have survived a day or two if there was a backlog. After being marched to the edge of a large hole, they were hit or stabbed with a weapon and allowed to fall into the hole. Once a hole was filled with enough dead or injured people it was filled in with dirt. Bullets were deemed too valuable to waste on these executions, so some people were buried alive. 8,985 bodies have been exhumed, many more are known to remain underground. Those skulls, bones and clothes that have been recovered are displayed in a huge stupa (photography is encouraged). 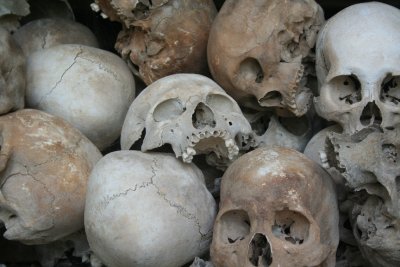 We saw some shocking things that will not be forgotten. Our visit coincided with the end of the rainy season – even after 30 years, the annual rains still disturb the ground enough to reveal clothes and bone fragments of the dead; we had to tread carefully. The 'Killing Tree' was specifically for the murder of young children and babies, who were held by their ankles and swung into the trunk, before being discarded in a hole. The coconut palms' serrated leaves still grow in the field, and are displayed as a reminder of the torture and killing weapons that were fashioned from them – touching one was like rubbing a finger along a rusty saw. 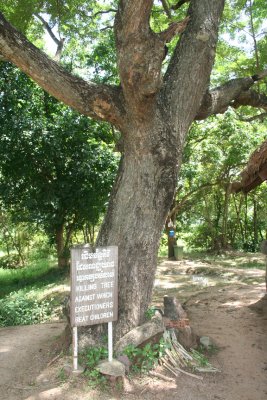 What we saw around Phnom Penh was shocking, as was the aftermath of the failed revolution. Around 1-in-4 Cambodians were killed, either directly by the Khmer Rouge, or from the starvation or disease induced by it's policies. It wasn't until early in 1979 (the year I was born) that Pol Pot was overthrown by the Vietnamese. The Khmer Rouge held their seat at the UN through the 1980s, and none of it's leaders have been held properly accountable. In interviews from his house arrest, Pol Pot said he had been “testing a political theory”.

Sihanoukville
In need of some light relief, we took a bus to the Gulf of Thailand for a couple of days staying in a bungalow by the beach. With an abundance of fresh fish barbecues, half-dollar beers and friends we'd made on the crossing from Vietnam, we enjoyed swimming in the warm sea and lying on perfect beaches. With no reminders of any international wars, civil conflicts or bloody revolutions, we were able to relax and think a bit about what we're planning in upcoming countries. 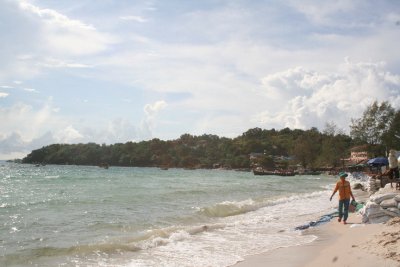 The shores of Sihanoukville

Temples of Angkor
Close to the Cambodian city of Siem Reap lie the Temples of Angkor, a sprawling complex of temples dating from around 1200AD that were the creation of King Suryavarman II. Angkor Wat – the main attraction – is just one of the many buildings spread across an area of around 100 square miles. Reminding us of the time we spent at Tikal in Guatemala, our imaginations ran wild considering what these buildings had looked like orginally, and how they'd been used. Recently they have been the backdrop for the Tomb Raider films, I can imagine the location scout's delight when he visited! 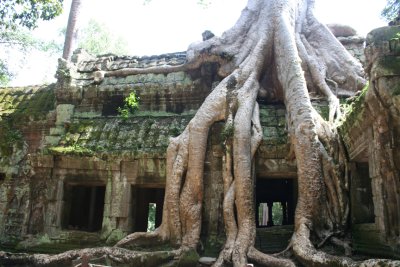 It is possible to spend over a week exploring the hundreds of buildings... we found ourselves a nippy tuk-tuk driver and entered the area shortly after dawn. Whilst we shared the area with many tourists, the scale of the complex along with the lack of standard routes meant we were often sharing a whole temple with just a handful of others. There were ample opportunities to make offerings to various Buddhas, and we said prayers for our families, our friends and our jobs!

After a long day's exploring in the searing heat, we returned to Siem Reap for a well-earned beer. Whilst selecting a restaurant we had a chance encounter with a girl we shared the back of a 4x4 with for three days as we crossed the Chilean-Bolivian border! It was great to catch up on the past six months and compare travelling stories. 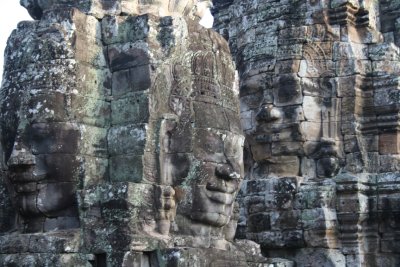 Three of the 216 faces that adorn The Bayon, the King's state temple

Food & Drink
Always a favorite topic of mine, I thought I'd share some of our experiences of the food in Cambodia. It took us a while to find some genuinely local specialities – we spent our first couple of days in Backpackerville, with pizzas, burgers and curries at every turn. All-you-can-eat Thali (a selection of curries) were a staple for our time in Phnom Penh, and hard to argue at the US$2 price tag. As we took to the road, buses made regular stops at foodstands where we were able to gorge on small roasted bananas, pineapple and plenty of dragon fruit. We were grateful that the jack fruit was pre-cut, as a whole one is the size of two footballs. We could always get enough fruit to keep us both regular for under $1 a day. It wasn't until we got to the coast and to Siem Reap that we really got to enjoy the fresh fish barbecues (squid, snapper and shrimps the size of a fist), Beef Lok Lak (a pile of tender, barbecued beef cubes served with a ground pepper and fresh lime juice sauce) and Amok (coconut-based curry wrapped in banana leaf). Generally we ate and drank for under $5 a day, and with accommodation costing no more than that, we have been able to stay well on budget here.

Keen followers may have noticed that we have forgotten to visit Laos, which was on our route between Cambodia and Thailand. Having had a bit of a think (and a careful look at a map!) we quickly decided that we could happily cope with fewer extended bus trips, and with Thailand apparently offering up such a dazzling variety of activities, we will spend a few extra days there trying to find some decent walking. Next stop is Bangkok, which will surely be an assault on our senses...