Having spent the past few days relaxing in Mongolian gers, the speed of life and brightness of Beijing's lights came as quite a shock! We spent a few days exploring this enormous city, in particular the Forbidden City and Great Wall, before heading down the coast to Qingdao, where the Olympic sailing events were held. From there we went inland to Tai'an, where Chinese Emperors (and tour buses) go to take in the Tai Shan mountain. We have experienced wonderful hospitality and helpfulness from the people we have met, finding all sorts of ways to get over the language barrier. And the food... wow! Another big impression on us so far has been how often we found small groups of people singing, dancing, playing mahjong or card games in the shady areas of public parks. Not sure I have quite got use to the spitting in the street though, which is still rather off-putting. 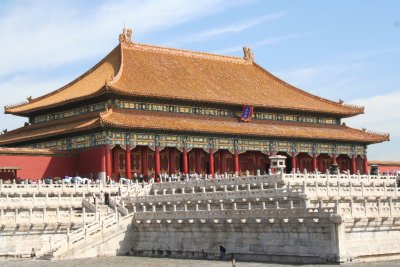 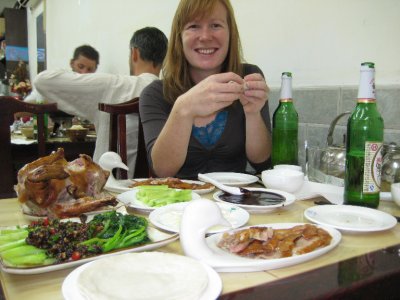 Beijing's specialty of Peking duck (and a lot of it!)

Beijing
Beijing is roughly the size of Belgium – an intimidating fact when you are trying to see as much of the city as possible in four days! Highlights for us included the Forbidden City, a network of palaces and temples where the Emperor and his many attendants/concubines lived until the early 1900s. The complex is enormous, with crowds of tourists who aren't afraid to elbow their way through to see a particular room or view, but we found that once you wandered from the main sights you could peacefully imagine how elegant and structured life in the palaces once was. The beautiful and ornate architecture was replicated at the Lama Temple, which was built in the 17th century as part of the Emperor's efforts to unify the diverging areas of China (including Tibet) through prayer – it was interesting to understand how long these tensions have been felt. 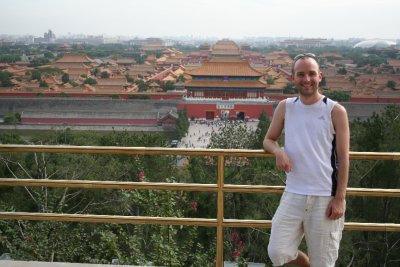 The Great Wall of China was built well before this more reconcilliatory stage of Chinese history, with the first complete wall finished in the 5th century BC, with the aim of keeping out wandering nomads. There are about 30km of the 6,000km long wall which have been renovated and we visited the Simatai stretch which carves sharply out of both sides of a river valley. Having experienced Beijing's tourist crowds I had expected similar at the wall, but found we often had it to ourselves as we wandered between the turret stations. Watching the wall stretch off into the horizon was mind-boggling, especially when you consider the work that must have gone into building it, and the fact that over a million lives were lost doing so. 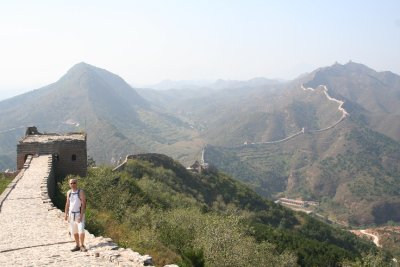 The Great Wall all to ourselves

After visiting lots of 'old' Beijing's palaces and temples, we went out to the Olympic Green area where the Bird's Nest and Swimming Cube were very impressive. They pipe pseudo-inspirational music through the park's sound system, which helps you to imagine what the atmosphere last summer must have been like. Roll on 2012! 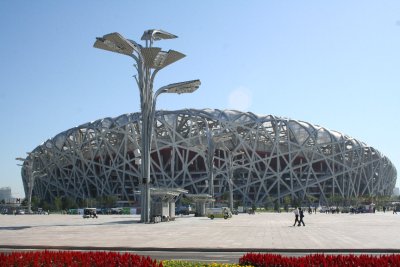 The Bird's Nest making us dream of Olympic ambitions

Our time around Beijing was fuelled by some delicious meals, including the local specialty of Peking Duck and regular trips to the local steamed buns and dumplings stall. There are many beautiful, ornate imperial parks in the city where you could sit with a dumpling picnic and watch the crowds go by. We went to an acrobatics show where the performers tumbled, flew and glided in a manner which suggested that they didn't get to enjoy many of these dumplings! 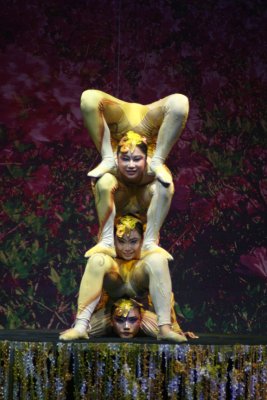 What not eating dumplings can do to a person!

Qingdao
After the crowds of Beijing we headed out to the coast, catching one of the fast trains (244 kph!) to Qingdao which is a popular Chinese holiday resort town and also where the Olympic Sailing events were held. It's like a very busy Brighton with a boardwalk along the shore and lots of chances to buy tacky souvenirs and snacks. Several of the beaches are set up for swimming, packed with men limbering up for a 'serious swim'. As the only western folk around, we got a lot of amused help from the locals with trying to work out the changing room system, and then braving a dip in the sea. 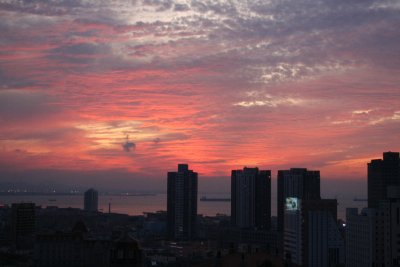 Sunset over Qingdao from the rooftop bar of our hostel (in an observatory!)

Tai'an
After proving ourselves as world-class sea-swimmers, it was time to take on mountain climbing again. Tai'an is a small town at the base of the Tai Shan mountain (1,532m high) which has been worshiped since 11th century BC. The route up the mountain is speckled with temples and engravings as many people (including all past Emperors and Mao) would make the pilgrimage to the summit. Unfortunately Rowan's knee wasn't up for the climb, so I took on the 6,666 steps in the dead of night to get there in time to view sunrise. Needless to say it rained all the way up and the rainy mist obscured the sunrise and view. However, I did get to spend two hours at the summit, wrapped in an second hand Chinese military coat which I rented from a stall sheltering in a public toilet, waiting optimistically in case the clouds cleared. Whilst most of the experience felt like using a stair-master in the rain, the clouds did clear enough on the way down to give a sense of the beautiful view around us. 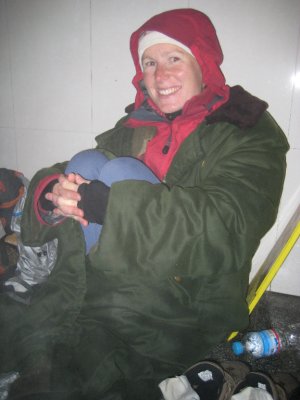 Hiding in the toilet before going back down the 6,666 steps

China so far has been an interesting mix of the very old and very new, and both are impressive in different ways. Apologies for yet more 'train chat'... but we have found it surprisingly difficult to get around China as you can only buy tickets from your journey's departing station. As we are coming into a national holiday week, and we can only get to the station a few days before we want the ticket, trains are often fully reserved. I'm starting to fantasize about www.thetrainline.com! We have managed to get a seat on the 12 hour journey to Shanghai, where the next set of adventures and steamed buns await us.