Our adventure has definitely begun again with a fantastic few days in St. Petersburg and Moscow, and with our first overnight train journey, between the two. Both cities are beautiful, with enough impressive art, architecture and history to keep us entertained for days. Each city's Metro competes for the prize of 'which can be the most confusing'; the jury is still out on who won. Whilst it was really tough saying goodbye to family and friends, being so busy over the past week has helped, and we are starting to get back into the swing of traveling. And as we get closer to starting the Trans-Siberian rail route – the journey which inspired a lot of this year's adventures - we are reminded why we wanted to take this year to travel. 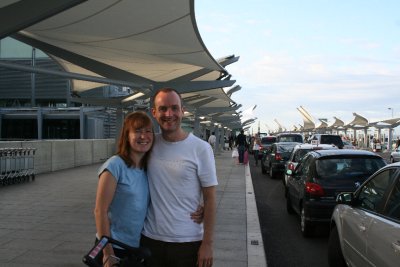 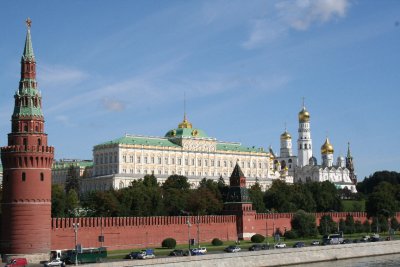 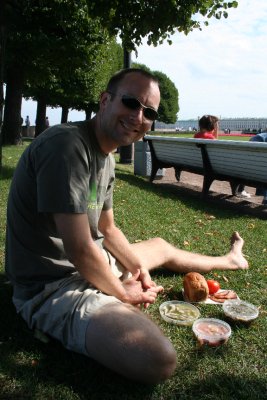 A picnic of unknown pickled fish products in one of St. Petersburg's riverside parks

St. Petersburg
We arrived into St. Petersburg airport – the last flight we will take until we reach Bangkok – for the start of our railway journey. St Petersburg is a beautiful city, with a canal network inspired by Peter The Great's time in Holland. Whilst the city was almost entirely destroyed during World War II, it has been lovingly reconstructed in the grand style of 18th and 19th Century European architects. Most buildings are painted bright sunshine colours, giving the town a very cheery appearance even on a rather dreich day. 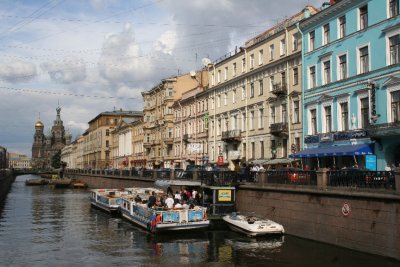 We paced the streets trying to take in as many sights as possible during our short time in the city, visiting several beautiful churches and gardens, before relaxing on a boat trip through the canal network. As most of the grand palaces back onto the waterways (these were the main form of transportation), it was an excellent way to see them. We also visited the Pavlosk Palace on the outskirts of St Petersburg. This is a one of the most impressive imperial palaces, built around the 1780s and then faithfully restored after a fire destroyed most of the buildings. 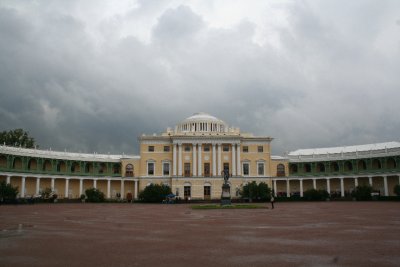 Pavlosk Palace in between the rain showers

At many of the most panoramic spots we encountered a wedding party – it seems to be traditional to get your wedding photos taken at various points around the city with buildings or views in the background. So, each wedding party (armed with bottles of bubbly and plastic glasses) is taken on a tour of many of the same places we went to and we saw groups throughout the day competing with the tourists for the best photo!

Our first overnight train
We joined the first (of many) trains in St Petersburg and, having deciphered the Russian alphabet on our ticket enough to work out which carriage and seat we were in, set off in style. The compartment was for 4 people, with 2 bunk beds that convert into seats for the day time. Additional features, such as frilly curtains and a rug, gave the room quite a homely feel! I usually find sleeper-trains rather hard to sleep on, but this was definitely the most comfortable I've been on. 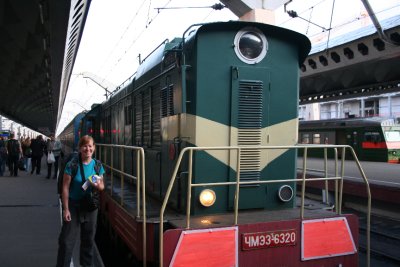 Setting out on the St. Petersburg to Moscow sleeper

Moscow
We arrived in Moscow at a painfully early time in the morning, so made a picnic breakfast in the middle of the station concourse before braving the Metro – it definitely wasn't something to be taken on with an empty stomach. More than 9 million people each day take the Moscow metro; that's more than the London and New York systems combined. Not sure that we quite blended in with the local rush-hour crowd, but we made it to our destination.

Our first stop was the Moscow Kremlin, the powerhouse of Russia, where the government machine works in a compound alongside a group of exquisite cathedrals. We took an audio tour round several of these, marvelling at the impressive golden iconography, stunning paintwork and lofty towers. Unfortunately we weren't allowed to take our cameras inside, but I'm not sure there is any way we could have captured how impressive the interiors were. On entering one cathedral, the local monks performed a short musical piece, echoing against the cathedrals walls – spine tingling. 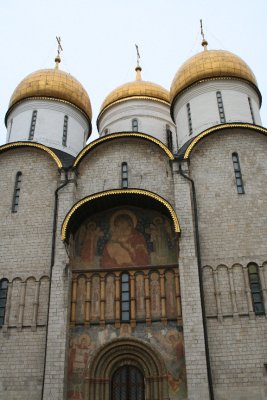 Assumption Cathedral inside the Moscow Kremlin

We also visited St Basil's Cathedral, which looks like a series of colorful ice creams! It is in fact nine, churches all built on a shared foundation with each church having its own turret (or ice cream) and creating a confusing maze inside as you wander between them all. The cathedral is at the end of Red Square, splendidly surrounded by other majestic buildings. 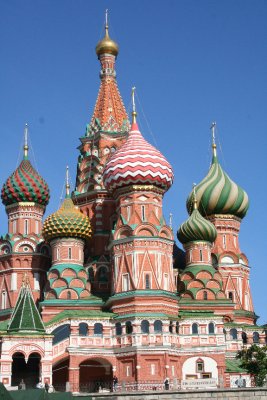 No trip to Moscow would be complete without visiting Lenin's tomb, where we were marched past the embalmed body of the man himself. It's a peculiar experience, and one which the guards don't let you linger over (we were in there for no more than 30 seconds) but interesting none the less. Apparently he wanted to be buried alongside his mother in St Petersburg so I'm not sure what he would think of thousands of tourists wandering past each day either. Plans to relocate him in accordance with his wishes have met strong objections from left-wingers and Moscow tour operators alike. 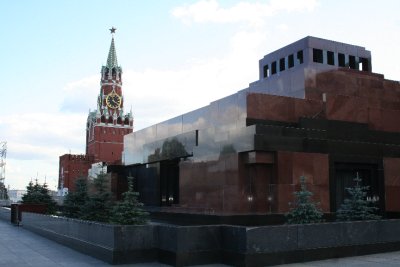 Moscow has a different feel to St. Petersburg – there seems to be a lot more money here and it is shown through a plethora of designer shops and some very well dressed and driven people. I found this richness hard to marry with the obvious poverty that is seen in the streets, particularly with older people. Some people seem to be being very left behind as Moscow becomes a glamorous city.

Russia so far has been full of surprises, in particular how beautiful many of the buildings are. We have been lucky and met some really friendly locals, but also encountered a fair number of folk who don't want to smile back. We have experimented with some delicious pickled and smoked fish (at least that's what we think they were) but also encountered the standard menu of potatoes and heavy meat. And now its train food and entertainment for the next four days as we set of on our journey towards Irkutsk.

That's a lot of games of eye-spy before we arrive....