Rowan's last blog introduced Mexico with the tempting prospect of cheap hotdogs......thankfully our time here has offered much more than that, with amazing Mayan ruins, some quality beach-time, and swimming in beautiful cenotes. And yes, he did get his hotdogs too!

Temptations of Tulum
Tulum is a coastal town which has escaped the high-rise resorts and has a laid-back atmosphere which was reflected in the wonderful hostel we stayed in (Posada los Mopaches – the house of the racoons, although we didn't see any of them around!). We went with the owners of the hostel to several nearby cenotes which are freshwater caves where you can swim and dive in deliciously cool and crystal clear water. In one we were lead through a secret passage and into another cave which was lit by streaks of sunlight from a small opening in the cave roof – stunning. 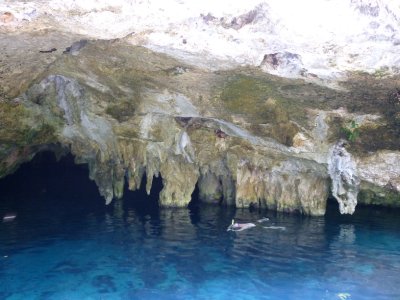 Tulum is also famous for its Mayan ruins which are smaller than many other sites but are fantastically located on the edge of surf-splashed Caribbean cliffs. After a wander round the ruins, you could lie back on the beach and gaze up at them on the cliff edge – if I was a Mayan, this would be where I would chose to live! 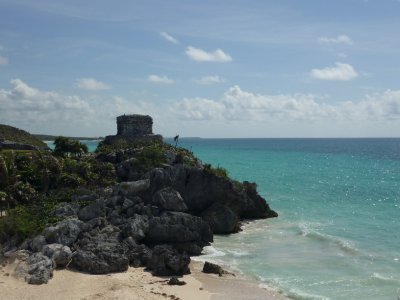 The Classics of Chichen Itza
We travelled to Chichen Itza via the traditional town of Merida where they hold a famous 'weekend fair'. The town itself is very beautiful, with streets of colorful houses but the 'weekend fair' only happens on a Sunday (and not the Saturday when we visited!) so we entertained ourselves watching a spot of local dancing in one of the many plazas from one of the charming 'love seats'. 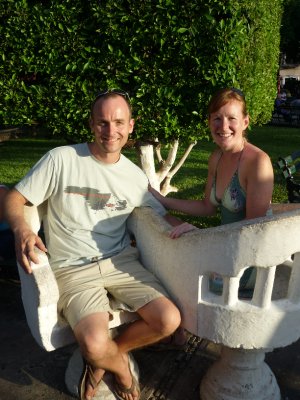 The Mayan site of Chichen Itza is inland and is far more gruesome than anything we had seen before; carvings of eagles , serpents and jaguars eating human hearts adorn most of the temples, and one covered with depictions of decapitated skulls was designed to be a sacrifice platform for captured warriors. We also saw the famous ballcourt where teams of 7 men would compete to get a small rubber ball through a hoop with the constraint of only being able to touch the ball with your knees, elbows and hips. And – to continue the gruesome theme – the loosing team had to sacrifice one of their players to the Gods. Maybe I don't want to be Mayan after all....... 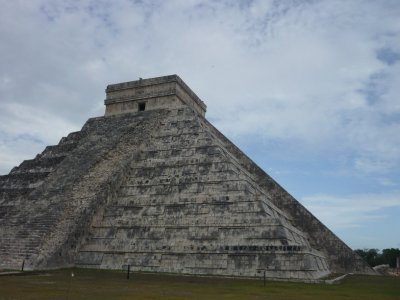 The castle pyramid in the centre of the site 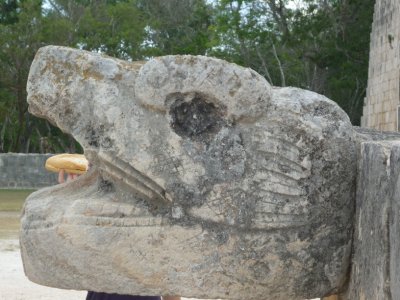 A serpent eating our sandwich!

Concrete Cancun
Cancun is the main resort town of this coastal stretch and the high-rise hotels stretch as far as the eye can see. We escaped out to the nearby island of Isla Mujeres where there is still a definite tourist presence but its a lot more relaxed. Sitting in the shade of your coonut tree, looking out over white sands to blue seas, you can see why so many folk come here! Sunset whilst eating a meal of red snapper was really rather special. 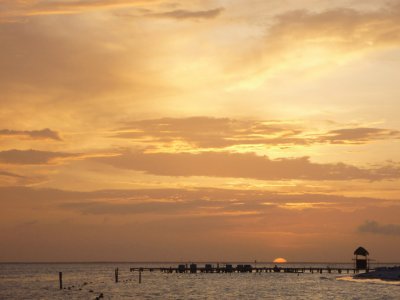