Week 6 of the journey

Hello!
well, we survived that wiggly road, and then another 24 hours on buses through northern Chile to finally arrive at San Pedro de Atacama which is on the border with Bolivia. The i-pod has broken (brilliant timing) which was a bit frustrating but we were driving through some incredible sceanery and there was always the man in front of us who seemed to want to share his music! We are now in La Paz so here is another wee update on how we got here....... 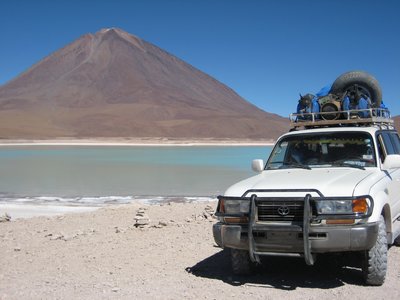 The jeep crossing the desert area

Highlights for those who prefer to look at the photos!

There are several ways to cross from Chile to Bolivia but we chose to do it across the mountainous desert and salt pans which stretch between San Pedro de Atacama (Chile) and Uyuni (Bolivia). This is a three day trip through beautiful lagoons filled with flamingos, shockingly cold but beautiful night skies and a hot spring which was a welcome relief to our tired bodies which were being thrown around in the back of a 4 x 4. From Uyuni we bused it up to La Paz and are now exploring this fantastic city. 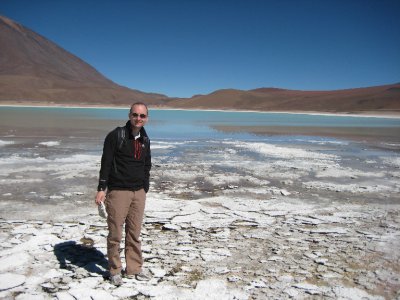 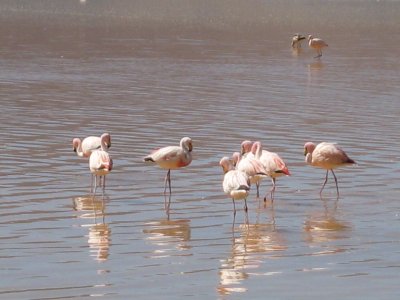 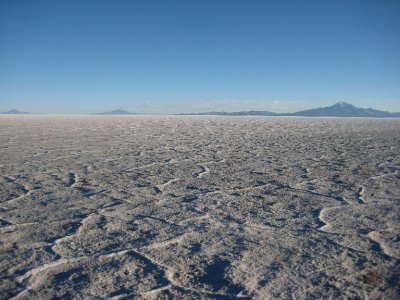 Salt pans stretching off for ever.....

We had planned to spend some time in San Pedro recovering from the bus journeys but decided after a quick look around to leave as swiftly as possible. The town itself is all about providing ways to help you to spend your money, with hiked prices, multiple tour operators and not too much else. So we got on a tour which left early the next morning, taking us through the Bolivian border to join the 4 x 4 jeeps which would be our home for the next three days.

We breakfasted at the Bolivian border crossing (essentially a small hut in the desert) and set off with our driver Franz, his wife, their two-year old son, 6 passengers, cooking supplies and utensils, and petrol for 3 days all squeezed in. Our first day was spent driving through stark mountainous desert landscape which was broken by stunning lakes. The lakes have a crust of white sand around them, giving colors of a turquoise lake, white edge, and orange desert – impressive. We stopped at a small hot spring which was being fed by water heated from a nearby volcano and a lovely break from the jeep, before continuing to an area of geysers glooping away. A very odd sight in the middle of a desert! The first night was spent at 4,300 meters in a very 'rustic' building on the edge of Laguna Coradilada. We all shared one room which was a blessing as it kept us warm(er) but a few folk in the group had a miserable time with the altitude. 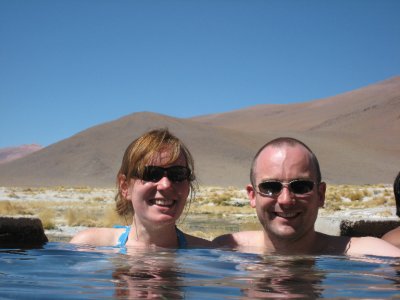 The luxury of a hot spring! 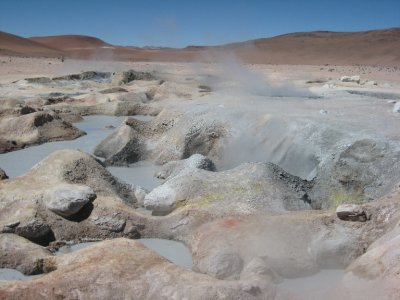 We continued across the desert landscape on day 2, this time seeing lots of flamingos which was a real highlight for me. In several of the lakes, groups of flamingos would elegantly position themselves (generally just out of distance of our camera!) as they fed and pruned. Their reflections in the lake, against the backdrop of the desert was beautiful. In one lake they were even joined by a few llamas which we tried to befriend! Leaving the desert area we arrived at the edge of the salt pan which has a circumference of 13,000kms. We stayed the second night in a small hostel made entirely from salt and which was really warm as salt apparently acts as a good insulator. A definite first to sleep on a bed of salt! 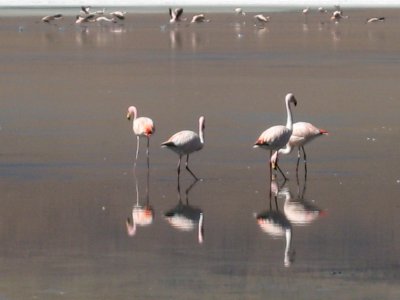 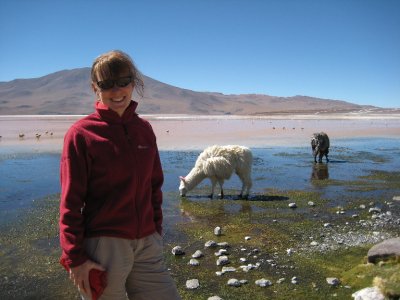 Getting friendly with the llamas

Day 3 started at 4:30am with a short drive out into the salt pan to watch sunrise change the colors dramatically and also reveal a lot of enormous cacti on the small rock outcrop we were watching the view from. It was cold but very worthwhile with the sun revealing miles of stark white salt set against a clear blue sky. We continued driving across the pans, stopping at the area where they 'farm' the salt and gather it for the markets. I wondered if any of it ever reached us in the UK? 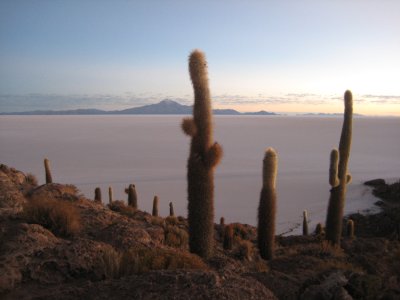 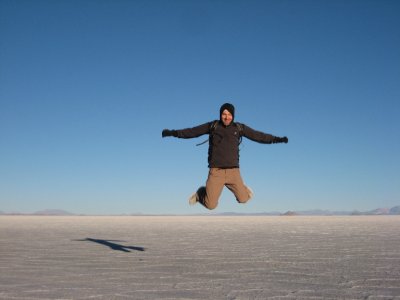 Rowan flying over the salt pans....

And then the trip ended in the local town of Uyuni, where the highlight has to be the train cemetery where old engines are dumped and left to rust/for boys to pretend to drive. The tour was definitely the most touristy thing we had done before – it's on the standard gringo route for backpackers – but it was well worthwhile, enabling us to see some incredible landscapes that we couldn't have otherwise in a very special part of Bolivia.

From Uyuni, it's a very bumpy night bus on unsealed roads north to La Paz. I wouldn't put the journey down as one of my personal highlights so far, but it did get us and our bags here in one piece. The descent into La Paz was something special though – as we got closer you could see how the city is squeezed into the bottom of a valley bowl, with houses clinging onto the edges of the steep valley sides. The traffic also went from fairly reasonable to fantastically chaotic with small local mini-buses (the way in which are the way everyone gets around) competing for space and customers through shouting destinations and hooting their horns. 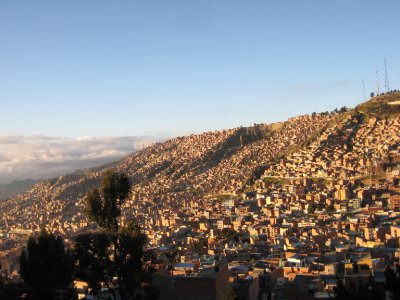 We are staying in a very chilled out hostel which is close to the center of town and friendly. So far, had a good wander round the city which is a real mixture of old and new with traditionally dressed women selling food on street corners alongside banks, internet shops and a few high rise buildings. There are some beautiful old buildings around squares where the locals were hanging out this weekend eating what seems to be the favourite snack – a glass filled with jelly and topped with sweet whipped cream. Its delicious!

We are still deciding what to do next so will leave this blog entry on a bit of a cliff-hanger.......