The first two weeks of our trip

Hola! We're two weeks in to our trip and having a well deserved Day of Rest. Having returned last night from a week-long walk in the Torres del Paine National Park, we're getting dried out, cleaned up and repacked for a cruise up the Chilean coast.

This is the first blog entry since we left London, and there's lots to write about. For the benefit of those who are just a bit interested, I've put some of the highlights + photos just below. An Executive Summary if you like. If you're more in to the detail (Hello Mums!) then read on.

Highlights of Weeks 1 and 2
Buenos Aires: the city of Tango, Steak and Evita – we saw them all (albeit two of them were dead) and loved just wandering around the city. On to El Calafate and the enormously impressive Perito Moreno glacier – with the front face constantly throwing huge icebergs into the lake below. The second week has been spent walking around the awesome (if often wet & windy) Torres del Paine National Park in Chile, long days walking and nights camping, the first time we've really relaxed into our trip and had time to consider the year that lies ahead... (more detail below, after a few photos). 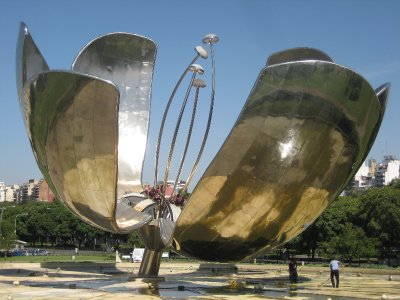 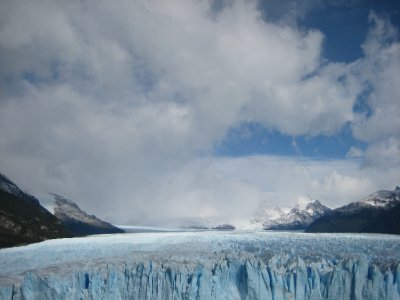 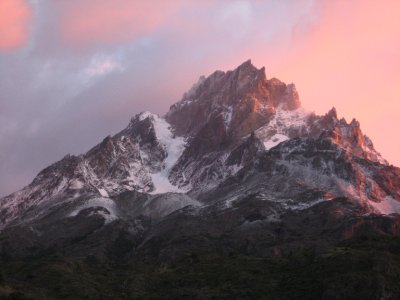 The first couple of weeks in detail
The final couple of days before leaving London were pretty frantic, but we managed a few farewell drinks with work people, family and then a lovely night out on the Saturday. It was at this point that the reality sank in - we were about to leave London, our jobs, our friends, our family and our flat for a year, and only some disciplined packing and Heathrow Terminal 5 stood between us and our Big Trip. 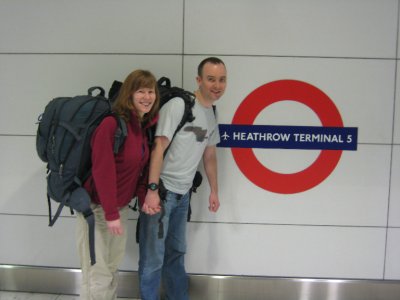 We started with four days in Buenos Aires: the city of Tango, Steak and Evita. Given we were recovering from a hectic few weeks at home, a long flight and an abruptly ended Diet Coke addiction, our days started late and finished early. The centre of Buenos Aires is big enough to walk around for days finding squares to sit in, buildings to admire and streets to explore. Once housed and orientated, we explored further afield and took in the beautifully regenerated city docks, parks and gardens of Palermo and the graves of Argentina's elite (follow the crowd to Evita's tomb...).

The Tango was provided in the evenings in a square adjacent to our hostel, with beer on tap and the promise of steak, it was an enjoyable way to sample it, in probably the least 'touristy' setting we could manage. And when it came, the steak was everything we had hoped for – delicious, hassle free and very cheap. A fillet steak meal for two, with more meat, salad and beer than could be consumed after a day exploring the city, for well under £15.

We flew out of Buenos Aires to Rio Gallegos, and straight on to El Calafate. An almost Alpine, tourist town on the way to Chile, the main attraction here is the unyielding Perito Moreno glacier. I don't think I completely understood what a glacier was, or indeed if they still existed (they were around in the Ice Age right?), but this was very impressive indeed. Unique – I'm told – in that its the only glacier that is still advancing; the 150sq-km mass is progressing at roughly 2m per day. What makes the considerable investment in the viewing platforms safe, is the fact that the front face of the glacier (5km wide, 60m exposed height) is dropping considerable icebergs into the lake in front. Periodically the lightening crack of ice followed by the thunderous impact on the water below sends another car-sized ice cube to be melted. It seems like an extraordinary coincidence that the glacier therefore retains its size and position. 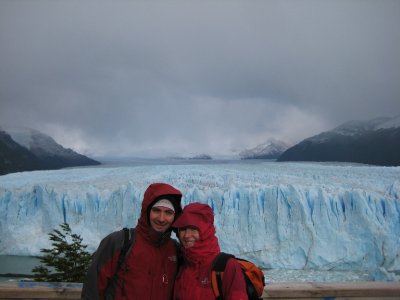 The bus trip across the border to Chile was uneventful (we weren't relieved of our significant stash of tuna + pasta, as had been threatened) and we landed at our current home, the Erratic Rock hostel in Puerto Natales. As the gateway to the Torres del Paine National Park, this is another town that is well tuned to the tourist river that flows through it, with a high street comprising hostels, Gortex-filled shops, dried fruit stalls and launderettes. Erratic Rock is used by many as a 'base camp' for a trip into the Park, with regular talks on recommended routes & kit, and a convenient rental desk to provide you with the kit they have just recommended. Having stocked up on enough food to feed Ali through 5 days walking (you try it!), we set out with our relatively under-sized bags (45 litres each) packed with tent, sleeping mats + bags, a change of clothes (yep, just one), a stove, pan and enough calories for 5 days of pretty serious walking.

It's been said a few times that the only people that talk about the weather in Patagonia is the tourists. The locals, the land owners, the gauchos all know better. The variation in weather – and the speed at which it varies – is unlike anything I've seen. At best it makes for challenging walking, given that you're carrying everything, and there's not a lot of time to wait around for things to dry. At worst it can be close to dangerous, as with few changes of clothes and no idea whether it's a 30 second rain shower or 3 hours of sleet, its easy to get wet and cold, with any possibility of dryness and warmth a long way away. The reward for visiting in the back end of the season is the relatively few people here, and that means experiencing the wonders of the area without crowds. 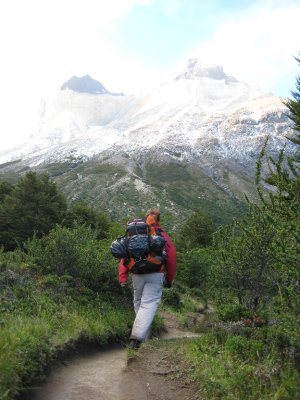 We opted to take on a route called 'The W', as that is the shape formed by the 5 days walking. The three published highlights (essentially at the top end of each vertical of the 'W') are Glacier Grey, the Valley Frances and the Torres (Towers). A short day's walk took us up to Glacier Grey. Although this glacier is physically no more impressive than the Perito Moreno, the solitude and wilderness from which you view it makes it at least as an awe-inspiring sight. Rather than following tourists around viewing platforms and queuing for photo spots, you're able to stand still, watch and listen to the glacier. The second day of full walking around to the foot of the valley was magnificent. We set new route records (I reckon!) in stunning conditions, with a well-timed porridge stop for lunch. The Valley Frances, viewed from its mouth at sunset is charming, with colourful rock up the eastern wall and snow-topped peaks up the western. Our walk up the valley was during a patch of cloudier weather, so whilst not treated to the postcard views, we did see a substantial avalanche. The penultimate night of our walk was interupted by a number of 'mini-tornadoes' which turned the campsite in to a bit of a mess. Our tent (along with a couple of other closely sited North Face Tadpoles) weathered the night well, but sleep wasn't easy. Our final day up to the Torres was a cocktail of conditions, as blissful sun and a steady tail wind turned to driving head-on sleet. We made it to a refuge just short of the Torres viewpoint, and given the reported 5m visibility, took the decision to descend a few hours to a cold glass of beer and plate of Pichangas.

So, tomorrow we catch the Navimag, a 3-4 day boat trip from Puerto Natales up to Puerto Montt. We're expecting an occasionally rough ride (magic sea-sickness pills on offer for 50p we're told...) and some great views of glaciers and fjords. As we head up to Santiago over the next few weeks, we plan to walk in the Argentinian Lake District and around the town of Mendoza, possibly to the base camp of Acoucagua, South America's highest peak.

We'd love to hear from you, what you're up to and how you're doing. If you really want to you can comment here, or write to us at rowan@bigtrip2009.com or ali@bigtrip2009.com.

Until next time, Buenos Noches.