New Zealand's contagious outdoor life continued to infect us as we travelled up through the North Island. Daily weather forecasts invariably warned of “...occasional cloud, perhaps clearing, with a possibility of showers at some stage...' so we ignored them and got out and about as much as possible. Completing two more of the Great Walks were highlights as well as immersing ourselves in the local culture (both old and new). 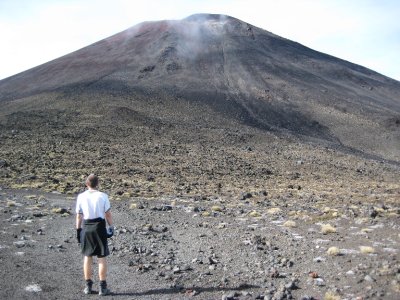 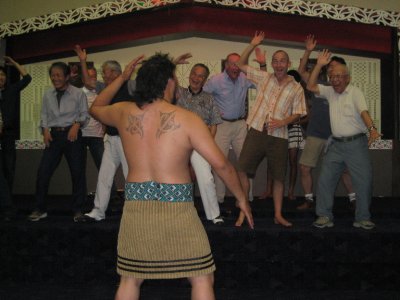 Leading my tribe through the Haka Ka Mate, Rotorua 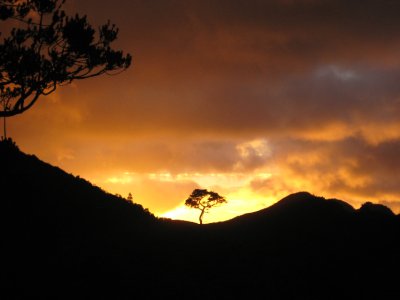 Sunrise above the 'Pinnacles', near Thames

Tongariro National Park
We travelled to New Zealand's North Island on what is described as one of the most beautiful ferry journeys in the world; and the views weren't spoiled by the thousands of AC/DC fans with whom we shared our voyage. We were set down in Wellington (the country's capital) and headed up to Masterton, where Ali worked in a school for a year in 1999. After a reunion with some of her favourite colleagues the sunshine encouraged us to go directly to the often wet Tongariro National Park. 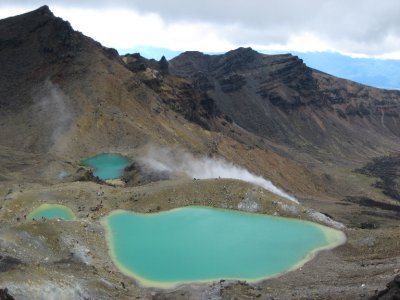 The Emerald Lakes, adjacent to Tongariro

Our fourth Great Walk, the Tongariro Northern Circuit was a three-day tramp through an active volcano field. Between the three volcanoes are lunar landscapes dotted with eruption debris, and a number of beautiful lakes and steam outlets. Our walk took in the one-day Tongariro Crossing which – as it was the first fine day for a while – was packed with walkers. The path sees upwards of 1,000 daytrippers on a busy day, so whilst it was a spectacular crossing, the rest of the circuit was far more peaceful and reminiscent of the more remote walking we'd done to date.

Napier and Te Urewera
We broke our two North Island Great Walks in Napier and spent an afternoon in the local vineyards. Having skipped the obvious Marlborough wine region we were hoping for some enjoyable tasting in Napier, and weren't disappointed. We were lead through an excellent overview of New Zealand's wines (not just Sauvignon Blanc!) and have since done our best to try as many as possible. Although not strictly part of our travel budget the wine here has been wonderful, with perfectly good bottles available for around £4. We've often thought our campervan's ice box would make it easy to keep a bottle cool over a day or two, but I'm not sure one has ever lasted that long. 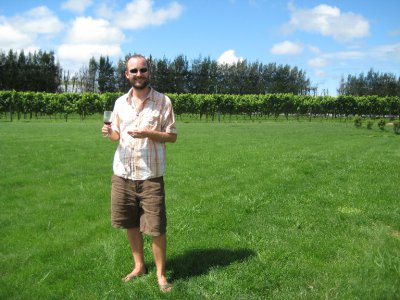 Sampling a beautiful red (!) wine at a vineyard, Napier

Our final Great Walk took us around the perimeter of Lake Waikaremoana. We shared the route with just a few others, who were also dedicated enough to drive the many miles of gravel tracks to find the lake. The clarity of the water was outstanding, and it was possible to 'snorkel' without a facemask, by simply looking down from the surface as we swam. The accommodation (basic huts) was some of the most beautifully situated we've seen, and it was a fitting end to our walking season. 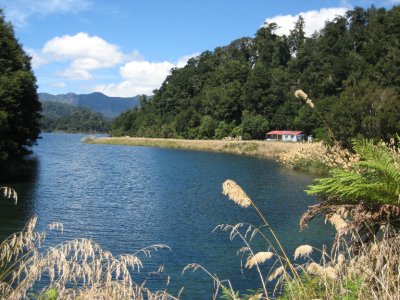 DOC Hut on the shores of Lake Waikaremoana, near Rotorua

A bit of New Zealand Culture
As we came towards the end of our seven weeks in New Zealand we were feeling pretty ignorant about the culture of the country. The dry weather we'd experienced had kept us out of the museums and up in the hills, so we made an effort to find out a little more about where we were. No trip here is complete without taking in a traditional Mauri creative performance (with accompanying traditional Mauri food, if possible) so Ali and I joined a coach load of Japanese and Korean tourists to enjoy an evening of dance and music. As the only English-speaking male in the audience I was elected Tribe Chief, and had a number of ceremonial duties during the evening, including leading a Haka ceremony. Ali joined the women folk for a vigorous Poi session. 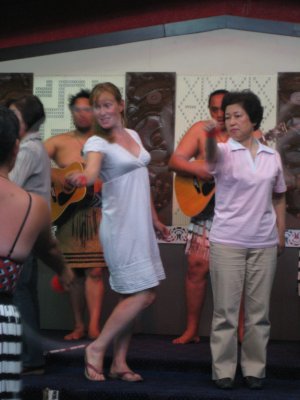 Ali shows the Koreans how to twirl a Poi, Rotorua

Our second helping of Kiwi culture was at the 18th Annual Paeroa Highland Games on the Coromandel peninsular. An energetic day of Scottish-influenced Olympics was put on, culminating in a moving military tattoo. The canvas castle did nothing to detract from the magnificence of the 17 bagpipe bands and their accompanying drum corps, who did Scotland proud with their evening entertainment. 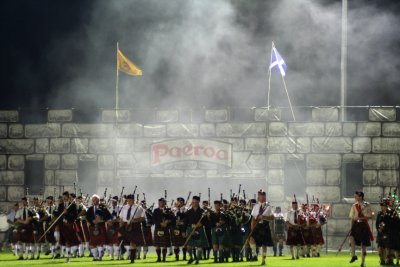 How many bagpipers can you get in to a two-dimensional castle...?

We spent our last couple of days with the campervan exploring the hills around Thames and then Auckland, taking every opportunity to enjoy some shorter walks. After 39 days of eating out the back of our van, we splashed out on some fresh fish and chips on Valentine's Day, and enjoyed views of Auckland's dusk skyline from Shakespear Regional Park, 50km away. 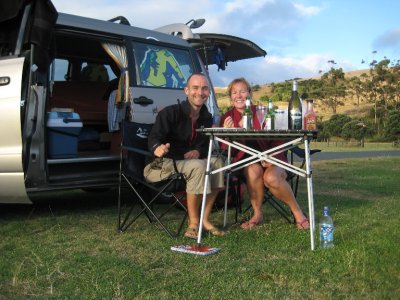 After 4,800km driving, four boat rides and upwards of 150 miles of proper New Zealand tramping, we can happily say that we've given New Zealand our best shot. It's become a Blog cliché that we could 'easily have spent much more time here', but it's true again – the accessibility and affordability of travelling here has been great; it's not cheap compared to South East Asia but better value than Australia or North America. Our campervan was undoubtedly a luxury rather than a sound economical choice (a car and tent would have been far cheaper), but it has provided so much fun and options to be imaginative with food, overnight locations and packing!

On to Fiji now, for our final days of the Big Trip. Time is starting to feel very precious....