Happy New Year! We're on our very last train journey of our year's travelling, down the east coast of Australia from Byron Bay to Sydney (where we will fly out to New Zealand tomorrow). It's been a month since we've written; this entry covers our four weeks in Australia. As we'd both travelled the classic Sydney-Cairns route on previous trips, we focussed our time on the southern coast of South Australia, Victoria and New South Wales, taking in Adelaide, Melbourne, Tasmania and Sydney. After celebrating Ali's birthday, Christmas and New Year in the space of a couple of weeks, we finished off in Byron Bay on the east coast for some beach time. Returning to a primarily English-speaking country and spending relatively large sums of money on car hire and city accommodation have ensured that Australia has been a doddle to travel around. Whilst this has been a welcome relief after our time in Asia, we've had no shortage of adventures and new experiences. 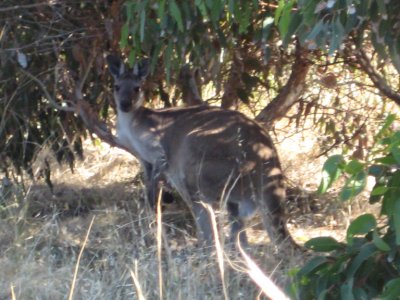 A kangaroo on a trail near Victor Harbour 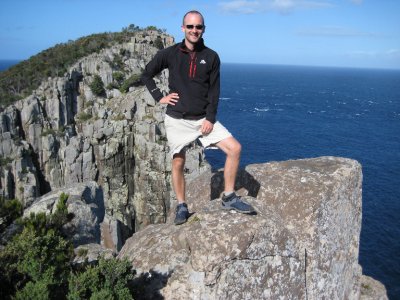 On top of a 300m sea cliff, Cape Pillar, Tasmania 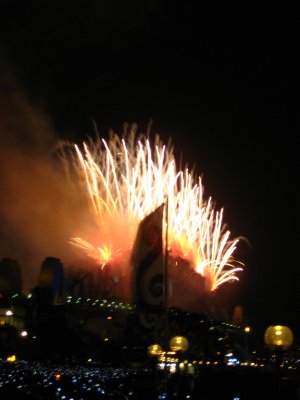 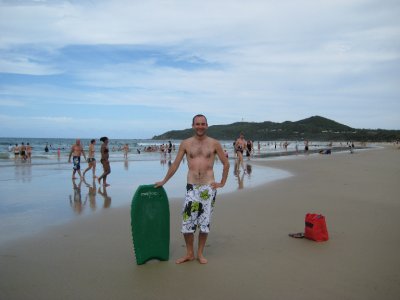 Singapore stopover
On our way from Borneo to Australia we stopped for 24 hours in Singapore (again). We were there at the same time as Lucy and Dave, who are on a similar round the world trip. Despite their best efforts to avoid us in Peru (we missed them by a matter of hours in Huaraz) we managed to go out for a meal in Singapore and take in the excellent National Museum between flights. (We also happened to bump in to an Italian couple with whom we shared a train compartment for three days from Moscow to Irkutsk!)

Adelaide to Melbourne, driving the Great Ocean Road
Three flights in 48 hours got us from Malaysian Borneo to Adelaide, and we took a night there to catch up on some sleep, pick up a car and try to work out what the time difference was (10.5 hours ahead of UK!). Having managed all of that we woke up on Ali's birthday and began our journey along Australia's south coast, with a short first leg to Victor Harbour. The birthday celebration included a generous sampling of the most local wine we could find, and an even more generous fresh seafood platter. Walking the trails around Victor Harbour provided our first wild kangaroo sighting and a worrying insight from a local regarding snake safety. 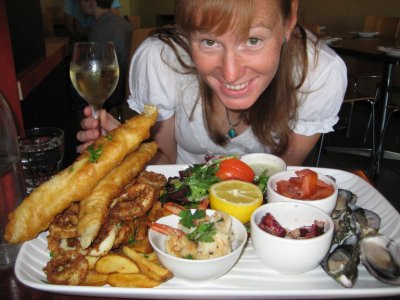 As we continued to drive towards Melbourne we passed along the Great Ocean Road. In a drive reminiscent of the Big Sur along the Californian coast in August, we admired the breathtaking scenery between Apollo Bay and Robe in temperatures of up to 39 degrees. The 'Twelve Apostles' is the headline landmark, but the length of the coastal road is rich in limestone formations. We awoke to a change of fortunes, and finished the GOR from Robe the following morning, in sub-15 degree weather. (Incidentally, just along the coast from Robe is the Lighthouse that features in 'Round The Twist'. A childhood favourite...) 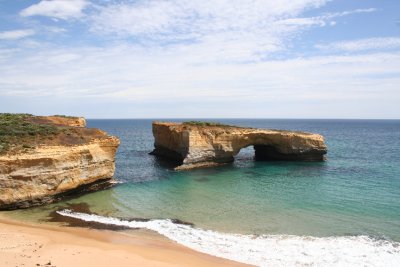 The 'London Bridge' formation, near Robe

Walking on Tasmania
We passed through Melbourne to stock up on camping supplies (including a smart new tent) and took a short flight to Tasmania for the pre-Christmas week. With a car full of camping gear and maps we spent our time between two of the most beautiful National Parks we've visited all year. The 300m sea cliffs of Cape Pillar in Tasman National park were spectacular, if a little daunting to peer out over. Mount Field National Park was full of challenging Alpine walking, and the weather gave us every opportunity to explore and marvel at the granite landscape. In both cases we were practically alone in the parks, coming across no more than a dozen walkers in each. Having the freedom to walk without compulsory guides is a luxury we missed in South East Asia and we built up large Christmas-sized appetites in no time. 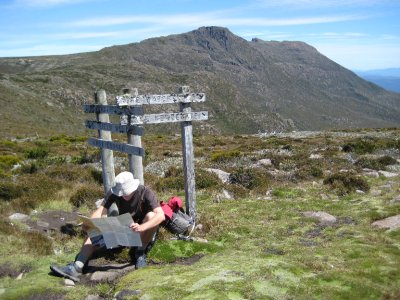 Christmas in Melbourne
We returned to Melbourne on Christmas Eve to make the most of what the city has to offer over the festive season. After stocking up on food we headed out to the annual Christmas by Candlelight carol concert, a televised event hosted by the Aussie equivalent of Richard and Judy. The unseasonal weather was unable to put a dampener on the event (for the first hour anyway) so we picnicked and sang with the thousands of people gathered in the park before retreating to our hotel to watch the remainder on TV. Christmas Day was hot and sunny and we took in some of the city's parks before settling in for a lake side picnic. On Boxing Day we made our way to the enormous Melbourne Cricket Ground for the first day of the tradition test match, this year between Australia and Pakistan. The day's cricket was not as eventful as the partying crowds in the adjacent section. 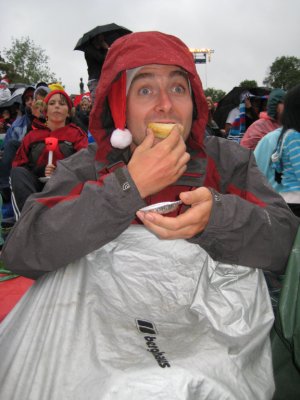 The Melburnian approach to Christmas differs from what we both know at home. Whilst it remains a popular public holiday, the focus appears to be on using the day to do something with family or friends without worrying too much about tradition or conformity. Going out for a walk, having a picnic or heading down to the beach for a game of cricket appears to be more important than labelling everything as 'Christmas' and devoting the day to specific celebrations. I'm sure the weather and cultural diversity of the city contribute to this greatly! 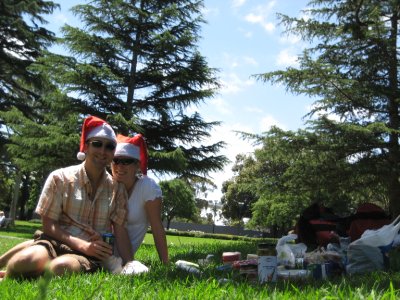 or Shine... Christmas Day dinner in the park, Melbourne

Melbourne to Sydney, driving the Princes Highway
The second leg of our south coast drive was another three dayer. We had a night close to Mallacoota in Croajingalong National Park, and walked along the sea lakes until we came across man-sized goanas. Everywhere was far busier in this post-Christmas week, as thousands of locals took to the beach areas. Our second stop was in the resort town of Broulee, where we stayed with a former work colleague of mine. His family's two week holiday appeared to consist of twice daily trips to the beach, punctuated by watching the test cricket and enjoying regular barbecues with the wider family. It seemed a wonderful way to see in the new year, and it was hard to say goodbye. After a morning of bodyboarding and good food we completed the drive into Sydney, arriving early on New Year's Eve. 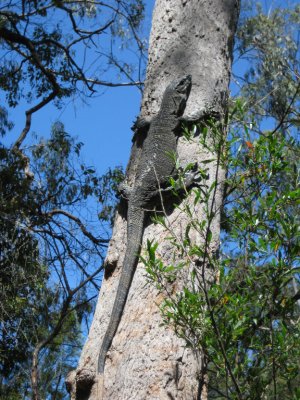 New Year's Eve in Sydney
We based ourselves near Coogee Beach in Sydney, not all that close to the city centre but the best we could find at five months notice - it turned out to be a beautiful suburb of the city, and just a short bus journey in to town. We decided against making a serious attempt for NYE bridge-views, as the observation points typically fill up by n1oon and a sun drenched 12-hour wait (in an alcohol-free zone) didn't appeal. We ambled down to the harbour around tea time and were amazed to find the last remaining grassy spot right next to the bridge, where we picnicked the evening away with a discreet box of wine. The six hours flew by and we were genuinely impressed by the magnificent midnight display. (The only event more noteworthy was the public transport bonanza that swung into action seconds after the final firework, and had us in our hotel room - 40 minutes drive away - by 1am, without charge!) 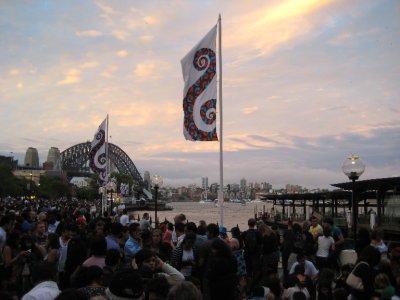 We saw in the New Year with a couple of days hanging around Coogee and a touch of Sydney sightseeing. The beach at Coogee was a swimming and barbecue hot spot, so we followed the locals in their sun bathing, sea swimming and kangaroo barbecuing. 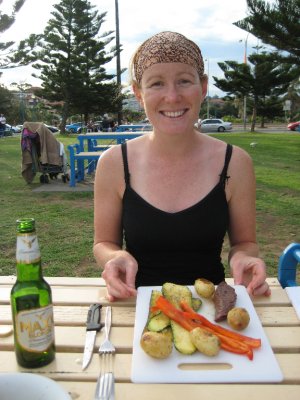 Byron Bay
We had a whopping five nights in Byron Bay, which is longer than we've stayed anywhere else in the world this year. The plan was to do very little but enjoy the beach, detox after our Christmas and New Year's celebrations, and work our way through the entire smoothie menu on the high street. We swam and read every day, and rented kayaks for a morning's paddling with the dolphins. We had joined thousands of Australians for their summer holiday, and the week provided the easy-living break we were ready for after our three weeks non-stop along the south coast. 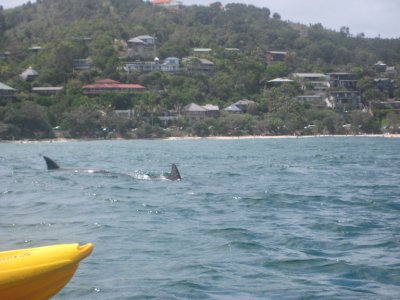 A pod of dolphins swimming around our kayak, Byron Bay

Australia has been everything we hoped for. As one of the few destinations we have both visited previously, we were keen to get a complementary view to what we'd seen before. By focussing on some slightly less touristy spots, making an effort to hunt down local contacts (to enjoy their limitless kindness & hospitality), and taking our tent out and about, we were able to combine some of the obvious highlights with some more remote experiences. It's been very easy travelling, with just the volatile weather and strong Australian Dollar to keep us on our toes; prices here are disappointingly high in places, but with fresh meat and just-picked cherries amongst the bargains, we've struggled through!

Next stop New Zealand, to collect our campervan....

ps – we won't be updating our e-mail addresses and blog URL, and will continue to be Big Trip 2009. If anyone's considering a trip starting this year, I can do you a good deal on www.bigtrip2010.com.....