Be prepared for a rather lengthy Blog folks: this one covers two fantastic weeks in Guatemala and is also full of photos courtesy of our new camera. Its been an incredible fortnight, and an excellent re-introduction to travelling after a lovely week staying with friends in El Salvador. Guatemala is well set up for tourists (perhaps overly so) and its been very easy to get around so we have seen a lot. We'll try to make the next entry shorter....

Highlights of Weeks 12 and 13
We visited Antigua, Lago de Atitlan, Chichicstengo, Semuc Champey and Tikal, all of which are on the beaten path with good reason. Highlights have included cooking on a river of flowing lava on Volcano Pacaya, relaxing on the shores of Lake Atitlan, swimming through caves in Semuc Champey lit only by candle light and spending a night in Tikal surrounded by 3,000 year old temples and some very noisy monkeys. The country has many natural wonders and with so many things to climb up, through or under, we would have loved to stay longer. 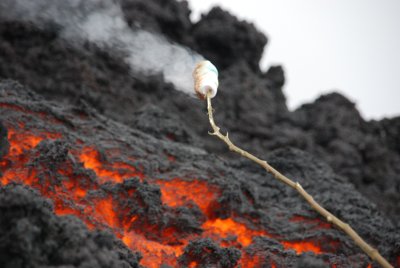 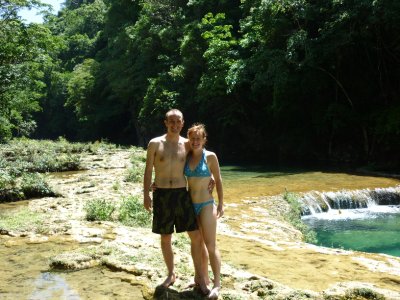 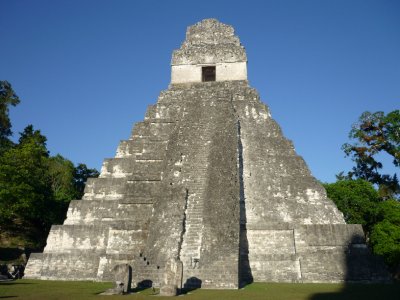 Tikal Temple I at sunset

Antigua and Volcano Pacaya
We went straight from Guatemala City to Antigua which is both safer and prettier than the capital, which comes with quite a bad reputation. Antigua is a lovely town of cobbled streets, a brightly colored cathedral or church on nearly every block and plenty of tourist services. From here we joined a group to climb the nearby Volcano Pacaya. The volcano first erupted 23,000 years ago and has been spewing lava ever since. We managed to get about 1 meter away from a sluggish flow of lava which was meandering down the mountainside. The heat from it was intense, melting people's shoes and threatening the odd bushy eyebrow. We enjoyed lava-heated marshmallows before descending, trying not to think too hard about thickness of the lava rock crust underfoot. 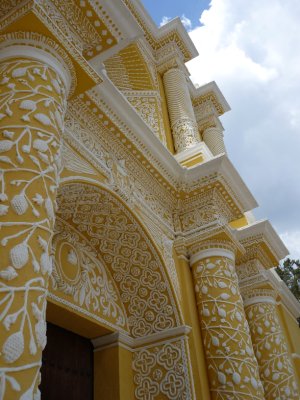 One of many jolly Antiguan Cathedrals 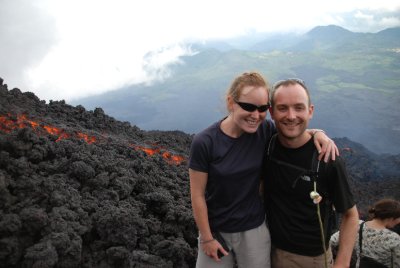 So close to Pacaya lava!

Lago de Atitlan and Chichicastenango Market
The volcano theme continued as we crossed to Lago de Atitlan which is formed in an old volcanic basin and surrounded by several newer volcanoes. The villages around the lake are connected by little ferry boats which buzz between them. We went to San Pedro to climb Volcano San Pedro – an extinct volcano, so a far safer climb. The route weaved through a forest of avocado trees and then maize fields, before scrambling up through cloud forest and then summitting, providing excellent views of the lake. The walk was powered by some extraordinary burritos, each the size of my arm and made at a local cafe called the 'Burrito Factory'. Should you ever be in the area, we can strongly recommend this place! 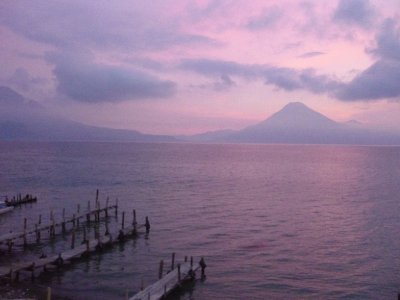 View across to Volcano San Pedro from Panjachel

We also visited a San Marcus which is a smaller village with a chilled out atmosphere . We joined in the local scene by finding a shady tree by the shoreline, taking out our books and not doing too much else! This was good planning in advance of the manic-ness of the enormous local market at Chichicastenango. This weekly event services the local villages as well as the steady stream of tourists that visit. Stalls of religious candles, pots and pans, sacks of maize competed with an eclectic collection of embroidered materials and souvenirs. Really interesting to wander around but also quite hard work. 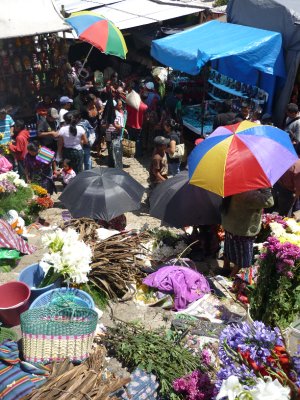 Semuc Champey
From the Lake, we went north towards Coban where we arranged a two day tour out to Semuc Champey which is described as being the most beautiful place in Guatemala. Semuc Champey means something long the lines of 'where the river goes underground' and is a series of gentle waterfalls and pools running through a steep valley. Having found the spot where the river disappears, we scrambled down a series of waterfalls to drop into the cave where it reappears. 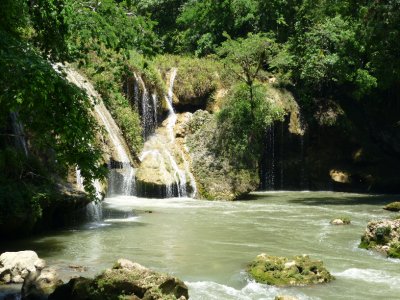 After a night in the surrounding jungle we joined a group to go into the Kayban Caves, a network of about 11km of caves with a river running through it. We explored about 1km, wading and swimming our way through narrow passages lit only by the small candles we were each holding and trying to keep above the water as we doggy-paddled around! The rock shapes were stunning and made even more atmospheric by the candle light. We also visited a far larger (and dryer) cave network at Lanquin where the caves were like something out of Indiana Jones – large temples made out of strange rock formations that stretched from floor to ceiling. The Mayan's made traditional sacrifices in one of the caves and you can still see the smoke stains from these ceremonies. 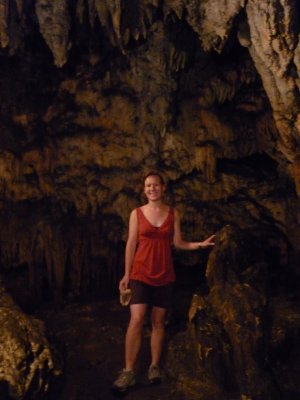 Tikal
After all those adventure activities, it was time for some culture and we headed up to the Mayan site at Tikal. This place was amazing on so many fronts. The structures and temples are extraordinary, some as old as 700BC and all beautifully made. They are surrounded by jungle, some are still partly unearthed, which gives the impression of discovering the place untouched by recent influences. The wildlife is also very impressive, with howler monkeys that serenaded us, beautifully coloured parrots, and brigades of ants that managed to pinch most of our lunch from inside our rucksack, inside our tent, whilst we slept. 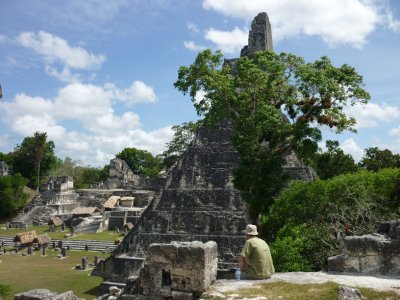 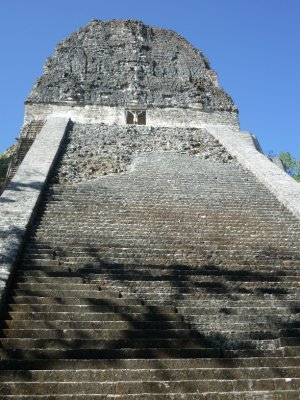 Rowan at the top of Temple V

The highlight for me was managing to bribe a guard (with marshmallows) so that we could climb to the top of the highest temple and watch the sun go down over the rest of the site and the jungle. We had the whole park to ourselves that evening, as there was no other tourists, and it really felt special. 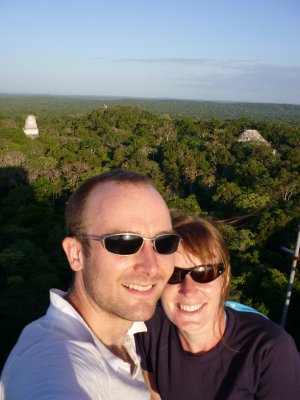 Sunset over Tikal from the top of Temple IV

And now we are back in our hostel, bravely attempting to pack everything into our bags in the sweltering heat. Tomorrow we head to Belize where the plan is for a lot of beach and snorkelling time, and a sailing trip through the Northern Cayes. And perhaps even the odd Caribbean cocktail!